Another day, another taste of the 31 Flavors of Horror. Most of the genre's success is owed to horror movies. In fact, most of Paramount's fortunes during the 1980's is built on the cash brought in by Jason Voorhees and his lovely mother. Both of those things mean that sequels are unavoidable in general, and this month in particular. So, settle in... over the next few weeks I'm going on several excursions with my main-machete-man, Jason.

(Significant Other isn't worried about this assignation, having self-esteem healthy enough to not be threatened by a zombie-slasher with bad social skills from the movies.) 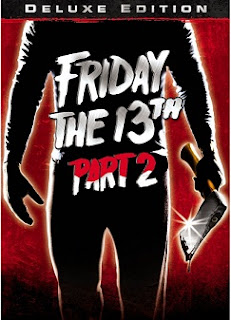 Why am I trudging through the Friday the 13th movies again? I haven't seen them since my teens, and they are at heart movies directed at teens. My teens were a while back, so it seems I'm choosing to revisit the series as a supposed grow-up out of some need to re-embrace the fun distractions of my youth. Can it really be juvenilia if you never give them up, these comic books and horror movies? I like to think my embracing them to this day means I was a prodigy with advanced interests for my youthful years.

Part II opens with Alice (Adrienne King), the "final girl" from the first film, and her ever expanding mushroom-hairdo in her fern-filled, badly decorated apartment. Seems Jason, the dead kid from the first movie is not only (retconned into being) alive, but has bothered to drag his rotting ass out of the forest and over to Alice's clutter-filled home. He even considerately brings his mother's head along with him. I kinda picture him carrying it around in a bowling bag. Alice gets one final shower, crank phone-call, and "spring-loaded cat" in before (sadly, I think) getting her loose end tied up. It may be just as well as the apartment made it look like she was turning into both a bad artist and a hoarder.

It's all terribly illogical, but that's perfectly all right. What's important here is getting to see a new bunch of teenagers get their dim, unpromising futures taken away from them. They're a big bunch, too, as we get a large group of them introduced and dispatched, crammed into a little more than 70 minutes of movie. These counselors at least get to spend their time at a much nicer camp - clearly someone's summer home with a guest house on the property. Amy Steel and John Furey are our leads here, as America's Sweetheart Final Girl and her Boss-Counselor Boyfriend. There's also the impossibly pretty, Tom Welling-lookin', Scott (the movie should follow him around more) and Terri, the skinny-dipper who's shorts otherwise must go all the way up her ass. Her tight shorts and tiny tops, which seem to have sewn-in nipples, make her the ultimate "slutty chick" for these movies, even if that title's undeserved. Perhaps Terri was just a free spirit, an innocent nymph returned to nature, who didn't recognize the effect her outfits have on men? Nah, she spells her name with an "i," which we all know is A Whore's Move. (I kid, I kid...)

On the whole, barring Steel and Furey they're just a bunch of meat with hairstyles, one in a wheelchair --but what do their personalities matter? For young people aspiring to be actors, the chance to play five-to-ten years younger for a few weeks in a horror movie must be a real lark. A job you can dine out on, and hit the convention circuit with, for years. Having a larger cast than in part one means there's less (ahem) character development, but more glorious, glorious murderin'. It's a shame none of them are as charismatic as the first film's Laurie Bartram.

After all, we're here to see them get ice picks to the skull, machetes to the face, and harpoons through their backs... what I like to call "The Fuck-ka-bob," pardon my French. One does get a little gleeful seeing Steel operate a chainsaw, but this movie stays more with manual labor-slaying than mechanically-assisted kills. They actually make a bit of (sadly brief) hay out of that chainsaw. It's the "gun in the first act," if you will. Anyhow, the smart, lucky counselors go into town to get drunk. The ones who stay behind for a wholesome night in (of skinny-dipping and pre-marital sex) don't fare as well. Let's review: Alcohol good, booty bad.

It makes no sense that Jason would have been alive all that time, hiding in the woods, never seeking out his mother, then being able to navigate all the way to finding and knocking off Alice. For a backwoods hermit who's implied to be mentally handicapped and deformed, where does he shop for those clean jeans he's wearing? This was a time before internet shopping, after all. Again, THIS MAKES NO SENSE - thank goodness that, again, it doesn't matter.

He's also kind of a drip for slaughtering a poor puppy-dog. It might've been one of those annoying little hair-mops, but it's still not nearly as offensive as a slutty teenage camp counselor. It's also rude to knock off Mark, the World's Champion Paraplegic, who just wants to get laid and someday walk again. Boy has enough troubles without a machete to the face. Jimmy, the annoying clown of the group, woulda been a much better kill, had he not chosen to ask the local elderly swingers if there's an after-hours place -- a move which unforgivably saved the lives of the six remaining counselors.

So it takes almost the whole first fifteen minutes of the movie to knock off Alice, then it's over an hour in before we see Jason-of-the-burlap-sack. You can't knock the pace of Part II. The whole Jason vs. Ginny and Paul sequence is less than twenty minutes long. Not a bad third act considering the plot's rather flimsy. Much like the face off from the first movie, no one here's superhuman. Jason's not the unstoppable zombie yet, even if here he's a clumsy mountain man pushing forty who's fastidious about tidying corpses, but can't keep a cabin tidy to save his life. The hockey mask he'll pick up in Part III really is a better choice, as the burlap sack sure doesn't do him any favors visibility wise. He stumbles as much as his prey when they run away.

At one point, Ginny even wets herself out of fear. Frequently mocked, it's the capper on Steel's performance. She really does play "terrified" better than anyone in the whole series.The character's only big mistake is not revving that chainsaw a second time once she finally whips it out. The psychology angle she uses at the end, though, is beyond silly. Amy Steel comes off feminine, but never soft... and always intelligent - that psychology notwithstanding. If Adrienne King resembles Kristy McNichol, Steel reminds one of... Mariette Hartley?
Part II ends with the same problem as the first. Everything after the slo-mo chop may or may not be a dream sequence. Does the sequence with the dead dog showing up and (the admittedly fugly) Jason jumping thru the window really happen? (Again, as with my write-up of Part I, don't kvetch about spoilers - the movie is almost thirty years old and if you're still reading this far you've already seen the bloody thing.) I like to think not. Better to think Ginny's just a mess and Paul's in another ambulance. Otherwise, it means Jason could have killed her but didn't - making one wonder what he did do, which is too icky to contemplate. This isn't a huge issue as logical sense ain't what these movies are supposed to make. More trashy, nonsensical, drive-in flavored, cash cow fun from the red-headed, bastard step-child of Paramount Pictures...
Posted by Jay at 10:00 AM