This big month of horror flick reviews carries on with another in the Resident Evil series. While I didn't have that much I wanted to say about the first flick, I get a little more in-depth here... along with some sidetracking about outfits and the evils of smoking... but sidetracks are about par for me, so I just go with it. 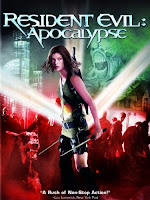 Number two in a possibly endless series of Milla Jovovich movies where she kicks zombie butts, Apocalypse picks up right where the first one leaves off. This time, instead of letting us in with no knowledge like the amnesiac Alice, we pick up multiple plot threads with Dr. Ashford and Jill Valentine: a cop in a tube top who shoots four people, albeit zombies, in the head prior to our seeing her face. We also expand the setting from the underground "Hive" to a walled-off Raccoon City.

The story is so opened up, in fact, it feels less like a continuation of the first film than a character from it shoe-horned into a new, different zombie movie. They also sacrificed the crisp, clean aesthetic of the first film for a muddier, less focused look here. However, before long, and faithful to the video game roots, we've established a game board of locations, a set of loosely-drawn characters, and some goals - though nothing headier than "find the girl" and "get out." There's a reporter, a pimp, a child, some evil scientists and a bunch of cops. No one gets much in the way of personality, but it's not important.

While a rather typical zombie movie in many respects, full of shuffling fresh dead and the shallowly-buried rising from their graves, but there's also a heavy sci-fi angle as well. The giant mutant dogs that can jump off walls and the transformations of the first film's survivors. Matt becomes a monstrous behemoth (Eric Mabius didn't come back for this one, it seems) named "Nemesis" and Alice becomes sexily super-powered. For the general action her brunette, red dressed heroine is replaced by Valentine in black (hair) and blue (tube top). Seriously, Jill Valentine may be the worst dressed movie heroine in history. Milla gets to rock shredded pants and a red wifebeater. Sienna Guillory gets a black miniskirt and a pastel tanktop. Her gunbelt matches her shoes, but it's cold comfort.

It's also kind of a shame Alice goes from the kick-ass but confused cypher for the audience from the first film to a super-soldier somersaulting off a motorcycle she's launched through a cathedral window. Jovovich mostly strikes poses in the series - little else is required - but also essays a crisp, no-nonsense weariness when required. She really is a much more sympathetic actress than given credit for, even if "Alice" doesn't always call for much nuance. She's also amazingly athletic, though many of her acrobatics suffer from the sense of weightlessness wire-work can have. That said, seeing her run down the side of a building is amazingly bad-ass.

The Raccoon City PD, a SWAT team called STARS here, are also a team of crack shots armed with rifles possessed of bottomless clips. In real life, an underfunded department may not do as well. I think reality would also have more characters like the police sniper atop the theater, enjoying brews and tunes while picking off the shuffling formerly-served-and-protected.

Like the first film, things are fast paced and flashy - the fights in the Cathedral and an attack by zombie schoolchildren are especially fun, though round two of the devil-dobermans gets to be a bit much. Things move fast and all over the "game board," meaning it can be easy to lose track of who's where and who's dead. Lots of guns and actors playing at soldiers and grownups. All that hustle and bustle means things quickly run to a third act that's the entire last third of the movie prefaced on simple, almost motiveless one-on-one gal versus monster combat, filmed so jerkily you'll be pining for the zombies to return.

...and then, thankfully, the do! Oh, my beloved zombie hordes. Between them, the absurd gun play, and lots of stuff going boom, these Resident Evil movies remain a dumb, fun night in of trash on your TV. That said, there's a lot of plot getting in the way of the story, to quote good old Joe Bob, and the end is something of a triple whammy seemingly there just to bridge us to the next sequel. This is more a movie and a half.

As an aside, it's always a shocking, sinful surprise to see characters smoke cigarettes in movies nowadays. Both Dr. Ashford and Valentine do, and it certainly still reads as, respectively, "world weary" and "bad ass." Smoking is, approve of it or not, an easy shorthand for characterizations. It's also unusual that leading lady Jovovich is willing to flash her goodies in both the first film and this. You don't see that like you used to, even in R rated films. More power to her.
Posted by Jay at 10:00 AM