Another night out with my main-machete-man, Jason Voorhees, and he's back to the boring, driven killer zombie and mama's boy that I first fell for, lo those many moons ago. Another helping of Friday the 13th action for you during the 31 Flavors of Horror month of October.

My little bonus anecdote is towards the bottom of the review and it regards Jennifer Cooke. Our leading lady wound up relaxing after her time in the trenches with a cup of Sleepytime, my most favorite of teas. Check it out! 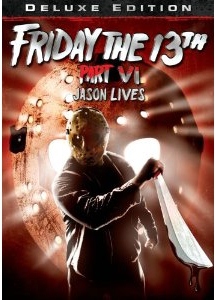 Ok, now these dates are just getting predictable. This is our sixth "Friday night" together, and you brought your mother for the first 3...

Is the passion waning? After the "Dead Fuck" of part four and dead fish that was part five, you gotta bring your A-game if you wanna spend this Friday night with me, Jason. Are you up to it?

Well, at least this one looks better. Films three and five were pretty damn bland and ugly and four wasn't much of a winner. A newer, blonder Tommy -this time the dishy Thom Matthews of The Return of the Living Dead and Albert Pyun's muse -and Horshack from Welcome Back, Kotter ditch the asylum and go dig up Jason's coffin - an act the movies always make look much easier than it'd really be. I think the editing helps. So they crowbar up the lid and reveal one gruesomely cobwebby, rotted, worm-riddled bag of bones. Well, Tommy wisely chooses to grab a big iron bar and stab the crap outta that corpse (Horshack wisely observes "oh, shit") and chucks the mask in. Then shit gets hokey. Two big lightning bolts hit that iron bar, and our decayed corpse proves to have beautifully un-decayed brown eyes. 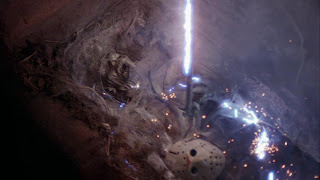 Tall, dark and ugly is back. This is now the full, trudging zombie Jason (he's a zombie, deal with it). Yes, I'm of the pro-zombie school of Jason ideology. Horshack says his heart can't take it anymore and a minute later Jason punches it out. HE then puts the mask back on just in time for the James Bond spoof credits.

Tommy ran away when Ron Pallilo got it (at the time, he was the big-star celebrity cameo, imagine that) and this film is running on all cylinders at ten minutes in. He arrives in a panic at the Police Station and winds up locked away. Irresponsible Tommy, who ended one killing spree, can't rest until he's started off another one.

Meanwhile, back at the camp...

A couple in a VW drive into the movie and nearly run Jason over. Tony Goldwyn wound up having a career, unlike most actors in these flicks. He's one of this pair of yuppies who go from introduced to killed off in just a couple minutes. These movies really are nothing more than a series of quick murder and sex vignettes, aren't they? He gets stabbed through the gut, while his red-headed gal-pal winds up in a mudpuddle waving money at Jason. He stabs her through the head and her drifting, lonely American Express card seems to be some sort of "witty" comment on yuppies.

I remember, as a child, seeing the above sequence aired on Entertainment Tonight as a sneak preview for the film (showing my age there), and it terrified me. I think I had bad dreams and worried over it for ages. Seeing it now, it's flimsy and badly staged... but it also brought back a touch of that emotional reaction I had back then. For a moment, I felt for these poor, sorry bastards who made the ultimate mistake of turning down the wrong road in the woods.

The Sheriff's daughter Megan and her friends, including the dead redhead's sister, are (blissfully for us) camp counselors come looking for their missing yuppies. It's just unfortunate for our jailed Tommy that "parents just don't understand." These counselors are deliciously 80s. Overalls, shredded jeans, mid-drift baring shirts on guys, Walkman headphones, bows in your hair that clash with your jean jacket. Even better, for the first time in all these movies, actual campers are delivered to the camp.

I'm now hoping for a killing spree like Sleepaway Camp II, where everyone gets knocked off.

We then digress to some business people playing paintball in the woods. The comic relief in these movies is pretty awful. It's like taking characters out of a SNL sketch and murdering them. The heartless Jason throws one into a tree while ripping his arm off, commits a triple decapitation against the most annoying ballers, and then confidently strides behind the panicking last business guy.

Personally, I'm hoping they're accountants. No particular reason, I mean, I  have nothing against accountants. I just picture them having the worst luck when leaving the ledger sheet for team-building exercises involving high-velocity paint pellets. They're just always a humorous choice.

Anywho, I got distracted here, so let's see. Tommy gets run outta town. Jason finds a drunk in the woods and shows that he don't cotton to litterbugs.  Another pair of even more offensive yuppies are picnicking and trying to bone in the woods when they wind up on Jason's radar. They get skewered on a machete.

Back at camp we get another visual pun. A sleeping camper with a copy of "No Exit" on her chest followed by a shot of a hamster running in it's wheel. Two of the counselors, Paula-of-the-hairbow and Sissy, interrupt their tacky-yet-topical "Camp Blood" card game (Jason's the Jack, the other face cards are counselors) when one camper gets scared by seeing "a monster." Humpy Cort, he of the shredded jeans and Walkman, took off to have very twitchy, unengaged sex in a Winnebago. It's no wonder Jason comes over and must kill them. Kills them but good. I think the cheesy rock, something about being an "Animal" is the real reason.

Megan and Tommy get together, behind Daddy Sheriff's back because, you know, that's the most dumbass thing they CAN do, while Jason find the new Camp. Daddy's out finding chopped up yuppie counselors and diced paintballers. They also establish that for once - I think the third time in the whole series, the events are actually taking place ON Friday the 13th.

The Counselors are easy pickings. Sissy gets yanked thru a window and gets her head twisted off. I wonder if she's suffered such indignities as Lexie on "Days of Our Lives?"  Paula's an awful counselor as even the sound of cracking wet body parts can't get her outta bed. She just tells 'em to keep it down. Eventually she's awakened by the scaredy-cat counselor who's seen Jason carrying Sissy's headless body and brought in Jason's obviously jam-smeared machete to show her. Paula puts her to bed then, with Jason playing peek-a-boo with her, gets to walk us thru some slow paced, strings-heavy musical cues before receiving the big J in her boudoir.

Daddy finally meets up with Megan and Tommy after some bad driving and road-head jokes. Megan proves Tommy's not a killer, but he still winds up in jail. It just occurred to me that, technically, based on the timeline and Tommy's age, this should actually be taking place in the mid 90s. They break out and are hot to trot back to camp, where Jason is actually wandering around the cabins. He... "investigates," for lack of a better word, the comic-relief camper who keeps seeing him, when the Sheriff shows up. He finds a cabin totally covered in blood and missing counselors. Jason puts a knife thru the head of one of his men and turns another from deputized to crushed-headed. This is where the movie actually picks up some dramatic tension. The Sheriff rounds up all the campers, who now know there's something threatening going on. He makes them dive under the bed, but just bringing them into this much play puts them in jeopardy in the audience's mind. If only there was a threatened puppy or kitten, too. The hamster just doesn't evoke enough sympathy.

He meets Jason and actually knocks him down for a moment with some shotgunny goodness. Jason keeps springing right up, though, being unstoppable and all. Worse, unlike most zombies, a shot to the head doesn't even slow him down. Then, for once in this godforsaken series, there's a third act that makes spatial sense and has some actual tension. Megan trying to find her father and calming the counselors. Tommy getting a trap ready to anchor Jason, The Sheriff being chased by Jason, then fighting him when he comes after his daughter. He actually puts up a good fight until Jason folds him over backwards-flat like a lawn chair.

Jason, however, has a short attention span. Tommy lures him away from Megan and out into the lake so he can wrap him in chains and use a rock to weight him to the bottom of the lake. The J-Dog gets his signature jump outta the water move a couple of times as we wind up with them fighting in the boat while surrounded by fire in the water - a nice touch. The two wind up fighting in the world's clearest pond water until Jason's anchored to the bottom and Tommy's floating to the top. Megan swims out just so she can drag out the ending with a stupid tug of war then use a boat propeller on him. Actually, this is another nice touch: it sure seems to actually do the trick on him as meat and gristle bob to the surface.

Counselor Megan uses her CPR powers to bring Tommy back to the here and now while surrounded by campers - no pressure there. It didn't really take much effort but I'm glad she pulled it off or those kids would be even MORE traumatized than they already will be. We all fade to the consequence-free next day to see Jason is still down there floating, but his eyes are open and he'll be boringly biding him time until the next one. Perhaps a nice cup of chamomile or Sleepytime would help him along? The actress who played Megan, Jennifer Cooke, is married to the founder of Celestial Seasonings, so she can probably hook him up. She wasn't a bad actress at all, shame she retired in the 80s.

Jason, sweetie, you're getting predictable, but you're still bringing it. This certainly makes up for Friday night date number 5, that's for damn sure. I guess I'll submit to another spin around the park in the surrey with you, though if you bring your psychic fruit fly I'm calling the whole thing off...
Posted by Jay at 10:00 AM