Number 11 in my 31 Flavors of Horror series, and it's another night out with my main-machete-man, Jason Voorhees. I fear Significant Other will start to get jealous, but then I just picture Jason getting run over with a Volvo and I know my home life will be just fine. Tomorrow, we're taking a break, but since Thursday is the 13th of the month, you can probably guess what's coming then... 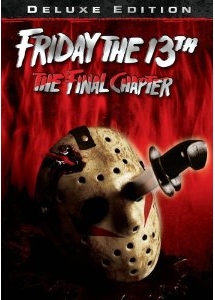 Oh, my gosh, it's like I'm in some sort of masochistic relationship ("He hit me with a machete and it felt like a kiss") and I'm back for part IV, or "4" if you're not a Classical Roman.

We kick off with a zippy montage that mixes footage from the first three to get you up to speed, not that much homework is required to know what's going on. We then pick up at the scene of the last film, with police bagging axes and taking away bodies. "He got seven kids and three bikers," so, perhaps sadly, Dana Kimmell lives to bore another day.

Then we get jerked to the carload of teens who'll be our cannon fodder for this excursion. The standout here is the surprisingly nebbish and normal horny teen Crispin Glover, who's evidently named "Dead Fuck," and his buddy Ted (Lawrence Monoson from The Last American Virgin). On their way to the lake they pass the ominous Pamela Voorhees headstone and an even more ominous comic-relief hitchhiker. She's introduced, waves a sign, peels a banana and gets a knife through the neck. She's probably on screen for less than a minute, surely not more than ninety seconds, and seems to be here only to make sure there's a body count of 13 without creating the expense of another speaking part. Three pretty flimsy kills, but we're only twenty minutes in.

More sex talk follows as these kids have nothing approaching personalities. One girl, Sara, is a little worried about her impending deflowerment by peer pressure but, having already met Trish, we already know she's a pink herring. They also meet some creepily identically dressed identical twins, who're more meat for the movie. As the teens quickly start skinny-dipping we all know they've clearly signed their death warrants.

Rob Dier drops into the Jarvis siblings lives, and immediately starts asking about the demographic of local campers. His sister was a character from Part II, and his character's motivations were folded into the Jared Padalecki character in the recent remake. It really is the best reason for any person to wander in these woods by now.

The teens have their evening of drinking and dancing, not really much of a "party," and they're barely characters. They act out a sketchy dynamic of who-likes-who and their petty squabbling and sexy yearnings are pretty thin. Let's just get onto the killing already. One girl, Samantha, perhaps - they really register so little I've no idea, gets naked and goes swimming in the most-likely freezing lake. She gets killed in an inflatable boat out in the middle of the lake, meaning Jason took the time to swim under water, hang out near there, and probably anchor the thing so he'd know where it was. Well, if he hadn't gotten her, hypothermia would have. The "Paul" she was bellowing for comes and swims out to her, rudely overdressed in comparison to her nekkid ass, and then panics when he finds her dead. He gets a harpoon to the crotch, easily one of the more imaginative kills of the series.

Their party, if you can call it that, is so boring looking it's actually a relief when people start dying. Sure, Dead Fuck and one of the twins get it on, but since we know he's nicknamed that for a reason, the living room action of getting stoned and watching stag films looks like more fun. Things are pretty incoherent over at the Jarvis house. Mom can't find Tommy, Trish, or the dog and then wanders out to... make a surprised face at a music stinger. I guess we can assume she just got it. I always feel like it's a real shame when any non-horny-teenagers die in these movies. Parents, children, old people, anyone who isn't a 26 year old playing a camp counselor should be off limits. Anyhow, Tommy and Trish come home to an empty house with no power, giving Trish an excuse to head over to see Rob "the" Dier.

Meanwhile, back to the body count. Twin A already got pegged to the wall. Dead Fuck gets corkscrewed and chopped and Twin B, or "The Sluttier One," gets yanked through a second floor window by Jason. How he hustled from the kitchen to scaling up the side of the house is beyond me. Ted, the last American stoner, somehow missed Jason sneaking behind a 5x5 tripod screen and gets stabbed in the skull. The showering "Pink Herring," Sara, and the boy with pretty hair miss all this sudsing it up in the tub. Pretty boy uses up the last of the hot water and gets the Psycho treatment, hopefully for his thuddingly homophobic banter. Sara blow-dries herself one last time before getting an axe that separates her ta-tas into two isolated tas.

Rob and Trish go over, ostensibly looking for Mom or a working phone, but instead  are there just to provide some "boos." Her dog, Gordon, who's popped up a few times, shows up to go and jump out a second floor window. Through the glass, no less. Trish sees some bodies and runs around screaming just in time to see Rob meet his sister's fate. She eludes Jason and does the "let's run around and find bodies" shuffle. I'm starting to think the only reason the final girls in these movies survive is he gets tired.

She runs to her fully-lit house with lots of big windows, so it's no surprise Jason breaks in within a few seconds. He really shows no consideration for anyone's property, causing a fortune in broken glass, doors, and framing. Jason quickly decides Trish'll be more fun to chase around than Tommy. I was hoping they'd do that to "Yakety Sax," but no such luck. They cause more property damage over at Casa Dead Fuckers, then she hobbles back home. It's just time killing so Tommy can cut his hair and show off his love of movie makeup established in the first scene. He shaves his head, which should take longer than it does, and smears a little mascara on. With a popped collar and some awful jean shorts, his look obviously reminds Jason of a mortifying childhood. Jason really isn't that bright. He's also highly distractable. Anyhow, we get to see his monstrous puss in some slow motion, then he gets a machete through the head - and slides down it - a mortal wound that finally puts Jason incarnation 1.0 down for a bit. Tommy finishes the job after seeing what I'd assume to be some nerve twitches. Little bastard's a bit of a loon. The overall effect looks a little hokier now as the years have gone by, but it's still pretty darn gruesome, all in all.

There's a nice little coda at the hospital, where I think all these movies should end, where we can establish that Trish is profoundly afraid of and for her wiggy little brat of a brother. Feldman looks genuinely creepy with the mostly shaved head, and gives a lame "boogedy boogedy" look at the end.

So, this vague excuse of a story somehow holds up under the weight of a lot of killing, a significant amount of nudity, and some incredibly stupid characters. It plods along artlessly, but entertains. The most creative so far, it also closes off what would've been an obscene, dumb curio of the 80s, if only it hadn't made so much damn money that a sequel had to be made. Still, an entertaining night in.