It's time for a new scoop of the 31 Flavors of Horror, and it's also Saturday, meaning it's my One A Week Review. What better way to celebrate both of these occasion than with the 42 St. Grindhouse superstar, Belial the deformed, murderous Siamese Twin in his debut, Basket Case, which was just released on Blu-Ray. I was lucky enough to get to review this for DVD Snapshot, but this is a fun, sleazy, playful flick I revisit every few years.

C'mon, you know you want to!

Bonus: if you ever wondered what happened to the beautiful leading lady Terri Susan Smith, she now works as an artist who creates amazing, one-of-a-kind stone bowls. 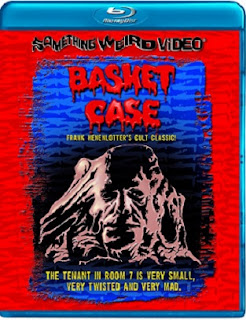 Official Synopsis:
Carrying a mysterious wicker basket wherever he goes, Duane Bradley checks into a flea-bag hotel in New York's Times Square. What's in the basket, you ask? Why, it's Duane's hideously misshapen Siamese twin brother, Belial! Together, they're in town to hunt down and wreak havoc on the sleazy surgeons who separated them...

With memorably gruesome scenes – such as the screaming woman with the scalpels stuck in her face – and some disturbing stop-motion animation, Frank Henenlotter's Basket Case is one of the most beloved, cheerfully demented cult classicks of all time. And now, for the very first time, Basket Case has been remastered in high Definition, making Belial look even ghastlier than ever before!

So go ahead and open the basket... if you dare!

Our Take:
Calling this a “Cult Classick,” as they do in the official synopsis, isn't really a typo. Basket Case revels in it's cheap “grindhouse”aesthetic. Everything on-screen is dilapidation and peeling paint. If nothing else, the footage of seedy circa-1980 Times Square would make this a must watch.

This horror-comedy hybrid is about two forcibly separated but psychically linked Siamese twins. Duane is (Kevin Van Hentenryck) normal looking and naïve, but Belial is a deformed, tiny monstrosity with disturbing eyes and outsized claws. They gleefully go about “The Big Apple” tracking down the doctors that split them up to get revenge. As Duane would like to be free to pursue a girl and Belial requires constant attention and a wicker basket, there's a running theme about striking out from one's family and claiming independence. (Just because that family member is a murderous, lumpen head with arms cleaved from the torso doesn't mean a general audience can't relate to them.)

No one is going to mistake this simple story for a quality production, and that's okay. As an example of grindhouse cinema, a cult hit, and creative independent cinema, Basket Case has earned it's place as a “classick.” Yet it's also an entertaining film in it's own right. The vibrant Beverly Bonner has a natural presence, but most of the acting is as stiff as the stop-motion animated Belial. There's a genial glee and DIY spirit that infuses the entire film.

The overdone gore, casual nudity, cheap effects, even the humor (exaggerated stereotypes, subtle names like Dr. Kutter and Dr. Needleman) has, in it's own way, stood the test of time. With a remastered blu-ray edition that allows you to make out every detail, from stains on shirts to the texture of the Belial puppet, you can both enjoy the film and appreciate the work that went into it. Frank Henenlotter clearly had talent and an unstoppable drive to make the film, and the ingenuity is marvelous. His future films (2 sequels to this, Frankenhooker, Bad Biology, Brain Damage) feature an obsession with the body along with a naughty, outsider's sense of humor.

Basket Case is definitely not to every taste. It's campy and amateurish. Heck, it's just plain weird in places, and even if you don't like it you have to appreciate it... but how can you not like its gory, trashy fun? 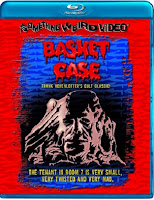 Audio & Video:
Even Frank Henenlotter, in his new interview, addresses the obvious question: “Why Basket Case in HD?” This film, shot on 16mm, has been cleaned up, and it looks terrific. Detail that didn't pop out in either VHS or DVD versions is crisp here, and now that we can better make out Belial's speckled texture, he's somehow creepier. The special features are either in 1080p or 480i standard definition. However, this is as good as this material can ever be expected to look, and it looks better than it should.
Meanwhile, the audio is mono here, and also sounds a bit cleaned up for the main feature. It sounds as good as can be expected.

Special Features:
-New video introduction by Frank Henenlotter (which is about the only thing I don't remember included on previous DVD releases)
-Audio Commentary by Henenlotter, producer Edgar Ievins, and actress Beverly Bonner
-Rare outtakes and behind-the-scenes footage from the director's personal collection: Beautiful, damaged, aged 16mm footage that's oddly hypnotic.
-From the 2001 DVD release, a video short: In Search of the Hotel Broslin, where Henenlotter visits the locations where Basket Case was filmed.
-2 trailers, a TV spot and 2 radio spots, along with a gallery of Advertising and behind-the-scenes photos.

Conclusion:
The passage of time and increasingly sophisticated film audiences threaten to make Basket Case an obligatory example of grindhouse cinema, but the DIY ingenuity and just plain weirdness make it a fun surprise for any B-movie fan.