Of Ice Storms and Hard Drives 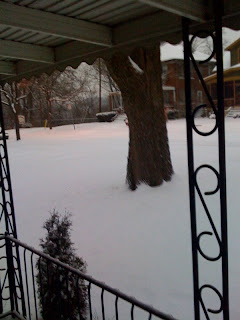 I find myself pacing around the house tonight. The news has been all gloom and doom today about the weather. We even got sent home early from work today. The drive in to work and drive home with mostly slippery and slidey, so I'm glad we got that opportunity to avoid rush hour. It's glazing up out there now, little ice chips hitting crusted-over snow and sounding vaguely like a crackling fire to me. If you step on the snow, the stop crust breaks like plaster. They say it'll (maybe) be the "Worst Ice Storm EVER" and all day long on Twitter we called it SnoMG!

Every five minutes I pace in here to fret if I should shut down before the threatened power outage happens or run another diagnostic. I've defragmented and run every tool in my System Mechanic's arsenal. My computer is still buggy and freezes up if sitting idle too long or forced to... well, do work.

Not a word in the vein of "pets taking after their owners," either.

The last two weeks have been buggier than ever, computer-wise and last night was my final straw. I couldn't look at a referral someone sent me. Namely, something that could be beneficial to me career-wise. Instead I sat around with egg on my face repetitively rebooting. There's little more emasculating for a guy nowadays than saying "I'm sorry, but I can't really read this right now because my computer doesn't work."

So, I'm going to be stripping her down and reinstalling everything shortly (by which I probably really mean I'll be buttering Matt up to to do it, which I will call him "helping me") and if that doesn't work, I'm going to pony up some credit or get a small loan and finally get myself a new machine.

In my head I call it my "infinite patience," but in reality I think it's just my "infinite masochism." New box coming... or rebuilt one. Either way, the dawn of a new and exciting era. One in which I can sit down and actually want to write a blog post instead of just rebooting and trying fixes.

Meanwhile, the house is chilly and everything's glazing up out there. I'm going to shut down, make a cup of hot tea, and curl up with an honest to goodness book (madness, I know!).

Email ThisBlogThis!Share to TwitterShare to FacebookShare to Pinterest
Labels: Where I've been

Agatha Raisin and the Guy Who Feels A Little Sheepish Admitting Publicly He's Read All Her Books...

One of my little list of resolutions for the New Year is to eschew always checking out the latest thing at the library that catches my fancy in order to pursue the amazing backlog of titles I've bought over the years that clutter up my shelves and add to the mover's bill, yet I haven't actually read them yet.
Since I'd checked it out before the list of resolutions were made and it was in the house, I decided to let the book I was about to start - and have since finished - squeak in under the radar. I'm going to try and keep the list through the year, more for my own edification and sense of progress than anything else, and will try and share my progress.
About 4 1/2 years ago or so, BJ suggested I read a mystery series she'd just started and was enjoying. I borrowed the first book from her, M.C. Beaton's "Agatha Raisin and the Quiche of Death" and enjoyed it so much I pretty much barrelled through the entire series. Since catching up with the backlog, I've scooped up each new one the moment I've seen them on the library shelves. The one I just finished "A Spoonful of Poison" was the 19th (yikes) in the series. The first fourteen all followed the conceit of titles starting with "Agatha Raisin and..." and I'm attached enough to miss that scheme.
This volume features the Agatha Raisin Detective Agency trying to solve a mystery starting with "Who spiked the pots of homemade Plum jam with LSD, leading to the deaths of two little old British ladies" through to "Who killed the Dreamy-yet-Stuffy Architect's first wife" and "Who stole the 30-grand to fix the Church's roof?" There's lots of visiting and countryside and fine cottages. Different oh-so-British characters travel by train and drink tea. Beaton finds a way to work in visits to and from all the series' usual characters and -as in most mysteries - people travel a lot to get things done that really could be resolved with a phone call in the real world. (While good for dramatic purposes, this is not unlike how it always amuses me in television shows like "Smallville," when people will drive to Lex's mansion (established as being twenty miles or so out of town) or all the way to Metropolis (three hours away) for a two minute confrontation... seriously, people, think about your carbon footprint!)
It's a cozy mystery series set in the English Cotswolds, and it's all very twee and comforting with pots of jam and painted china on the covers. Full of thatched cottages and Vicars' wives, as much stays the same as changes and evolves - and what are "Cozies," if not comforting?
I think I enjoy the series because the lead character is composed of the qualities most of us like to play down in ourselves (she's prideful, dyspeptic, cantankerous), making her very human. I think the wish fulfillment qualities of telling people off help immensely. The way she's described, small, with "Bearish" beady eyes, and her general demeanor - I always picture in my head Judi Densch (in fact the whole conceit of her and her pursuit of the equally grouchy James Lacey always makes me think of the old BBC TV show "As Time Goes By" with her and Geoffrey Palmer courting after 38 years apart).
The series also has followed an honest timeline. I like that the characters age and evolve, and in a pop-culture world where most characters keep status quo and try not to break any of the "David & Maddie" rules, it's nice to see a lead who sets her hat for someone, eventually gets him, marries him, then eventually divorces, and moves on. They could have easily stayed together, but had the same 50/50 chances as the rest of us. In the meantime, she does have some thru-lines like subsisting almost exclusively on freezer burned curries and being a character who, refreshingly on the grounds of PC-ing up popular entertainments, still smokes.
Beaton publishes probably 2-3 volumes a year in both her "Agatha Raisin" and "Hamish MacBeth" series (of which I've only read two), so she's little like a cozy-mystery version of the James Patterson industry. If one or two Agatha Raisin titles come out over the next year -- well, I'll probably have dropped my resolution by then and snatch them off the "New Release" shelf...
Posted by Jay at 10:45 AM 1 comment: