Today's 31 Flavors of Horror entry, Dead & Buried, is a cult classic that if you haven't seen it yet, you should stop now and go get a copy and give it a watch. It's a great fall movie, to save for some drizzly night when you just wanna stay in and enjoy something a little cerebral, a little trashy, and a lot of fun.

I think it really does have the heart of a Twilight Zone episode, and it's a twisty and sometimes nonsensical ride. But if you're taking it, may I recommend as a bonus getting the "Inflation Fighter" from Adriatico's Pizza? It's a delicious, heaping monstrosity of a pizza - one I first had the night I rewatched this -and perfect for the rainy night-good spooky movie-delicious pizza trifect!

I first saw Dead & Buried 10 years ago and didn't remember much about it beyond loving it. Upon seeing it was available now on Blu-Ray I figured it was time to order in from Netflix and give it another shot.

No bones are made about the fact that you do not want to be welcomed to the lovely sea-side village of Potter's Bluff. The first esteemed guest we meet gets flashed by a pretty girl and then set on fire. This... is a village of mixed signals.

The Sheriff is unaware, but all the local mechanics and waitresses, fishermen, and families are all in on a big secret. They like to film and photograph it, but the star of the show's busy getting murdered, so unlikely to care about their best angle.

(Spooky twists and turns lie after the jump!)


Sheriff Dan Gills, our lead (James Farentino), is soon on the trail of two murders. As we're quickly introduced to the local undertaker, the brilliant Jack Albertson as William G. Dobbs, we're not surprised that the paths keep leading to the Funeral Home. He's impassioned about his art... and signals to the audience he's something of a whackadoo to boot.

The Sheriff stars investigating the two murders, but doesn't really clue into something being really wrong until he encounters a dismembered limb that's still moving and whose owner is pissed. Blunt clues and lots of mind-fuckery make his investigation a creepy, spooky thrill ride. Nothing here is subtle, not the gleefully murderous townspeople, not The Sheriff's self absorbed, red herring flinging wife, and not any of the clues.

So the gleeful group of killers are a tad over-zealous in their work, as there's really no reason to eliminate every single person who comes near town. Maybe they just like their killing and their photography. Stan Winston's effects and Dan O'Bannon's writing make this an A-picture, or at least a B-, blow up of a Twilight Zone story with grisly touches.

Dead & Buried is all washed out colors and fog. There are the soft edges and flared lights that look so sumptuous in a good transfer. On Blu-Ray the film's browns and grain seem like tactile things.. 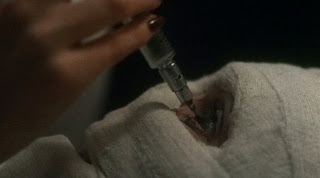 Good practical effects here. One man gets burned nearly to death, then while wrapped in bandages, gets a very long needle through his one exposed eye. (Dude, that whole thing is a puppet, too, not a person!) A drunk fisherman gets a couple hooks in him, Later on, a whole family are batted around by the townspeople like a mouse by a cat. While one fake head, the acid effect, isn't very good, the sequence of embalming an unfortunate hitchhiker is outstanding.

Dead & Buried is a fun head-screwing ride with a crazily twisted ending. Quiet and almost subtle by today's standards. Highly recommended.
Posted by Jay at 10:00 AM