Another bloody video game zombie movie with waify chicks who kick ass in combat. It's a thing. I kinda love it. This one, like the rest, won't make you want to adopt a Rottweiler, nor will it make you want to visit Las Vegas.

It will, however, make you hope you're a gorgeous, genetically-engineered model-slash-actress-super-ninja in the event that there ever IS a zombie apocalypse. Because, let's face it... I wrote this and you're reading this, meaning, my darlings, the chances that we are BOTH first-line cannon fodder in the event up an uprising of the undead are probably pretty stinkin' high... 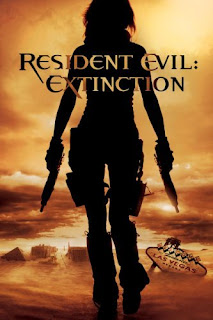 We roll through a quick rehash of some footage from the first film so we can get to the third point. The third? Eww, there's a whole bunch of dead Alices and a slew of parched, dessicated zombies in the middle of the desert. Is that what happens when you eat the silica gel packs in shoe boxes? They even take a piece of footage from the last film, the CG satellite shot, and re-dress it for a parched Earth. I appreciate the frugality.

At this point in the storyline - and I've no idea if it echoes the video games - the very Earth is dying, and Alice roams the vast, parched wastelands looking for survivors. The sleek steel of the first film and jittery city grime of the second are replaced here with sun-bleached, parched lands of the American west. The red dress swapped out for a long duster. The sweaty browns remind one of the look of another grim third film, Alien 3. The first gang she encounters are a family of survivors in the Sawney Bean tradition of scavengers. Sadly, at this point, Alice's humanity has morphed into something along the lines of a "super-soldier" (her acrobatic ninja skills now supplemented with telekinetic skills) and she makes short work of them and their devil-dogs. Seriously, they devil-dogs are MORE than a little overplayed at this point - though the devil-ravens are beautifully cinematic touch.

Other survivors are on the move, traveling Mad Max style in armed caravans. Carlos and LJ the pimp from the second film are part of it, but Jill Valentine is replaced by Ali Larter and Ashanti. Most of the character development here seems confined to snippets in the deleted scenes on the DVD. Things move fast and stick to the action. The feeling of the world overwhelmed here is similar to Day of the Dead - as is the level of dessication. Evil Dr. Isaacs from the second film is here, too, and he's deeply mad scientist. Our "Bub" here plays with a cell phone and camera in place of a Walkman and a Stephen King novel (These third films are all sisters in spirit) The real horrors of the world walk in daylight anyhow, so why shouldn't the zombies (the go-to stand in for that for this start of the Twenty-First century)?

The promise of a haven in Alaska keeps the plot moving, but these enormous, impossible underground Hives filled with evil scientists and Alice clones keep mucking things up. The bird attack sequence, ending in a flaming skies, makes the movie a third of the way in. The entry to Las Vegas is also impressive. They say at one point five years have gone by, but it's hard to believe the sand could smother the strip completely in that time. Also, for all the iconic structures of the strip surviving there's a helluva lot of buildings missing. Vegas is also home to some very impressive man on zombie carnage. Jovovich looks less weightless in her wirework, and more feral in everything else. They really find every single way to do the head shot in this movie. Skulls explode and pop every which way by gunshot and shotgun blast.

Moving from setpiece to setpiece until we're back in "The Hive" for Alice versus Dr. Isaacs, things scoot along at a rapid, bloody clip. Nothing to get bored of here. That video-game based goal-oriented storytelling comes into play again here. Alice meets a "White Queen" program (the first film had a Red) who gives her her assignment for the third act. It's a fairly satisfying build on what's gone before. Disposable characters come and go, and too much plot gets in the way of everything, but in the end bad-ass super-gal against giant nasty monster is always fun to watch. Best not to question the logic though. There's no reason to build this silly facility. No reason to recreate the whole mansion from film one, complete with death traps, just to see if an Alice clone will succeed and work for the bad guys. Why bother to grow eighty clones just to kill them off in the first few minutes? It's dumb.

The end is a fun set up for the next film, with it's potential army of super-soldiers. We'll see if it pays off...
Posted by Jay at 10:00 AM