31 Flavors of Horror #24: The House Where Evil Dwells

What would getting ready for Halloween be without watching some Haunted House movies. Here's one for the 31 Flavors of Horror that I remember seeing as a kind on USA, some Saturday afternoon, and it messed me up! I remember this one as being bleak, and scary and sad... and I'm sure it doesn't hold up now. But with a cast that's Edward Albert, Doug McClure, and Susan George, how can I not give it another look see?

Bonus: This was directed by the same man who made Motel Hell, and if you've never seen it... go, now!

31 Flavors of Horror #24
The House Where Evil Dwells 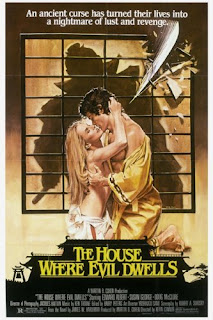 In both the movies and real life, a bitchin' piece of real estate will get snatched up off the market even if it is the site of multiple homicides. In the movies, however, they do tend to come with ghosts. I think it's safe to assume from the title that there'll be ghosts in this.

I think this movie banks on its American audience not knowing anything about 1840's Japan, or Japanese culture in general, beyond what they've seen in Kung Fu pictures. The House Where Evil Dwells opens on a man with a bad, feudal-Japanese pseudo-ponytail haircut visiting a young woman at a country house. She serves him tea, gives him a small sculpture of a beast thats making "the beast with two backs,"and plays that haunting Shamisen string-music that I find completely atonal but mesmerizing. That music is heard by another badly ponytailed man who rushes up to the house to investigate. Ooh, I betcha he's the hubby. He sees the man and woman kissing as shadows through the rice paper wall, and a kimono getting undone.

You can't blame him, I guess, for breaking in like a slo-mo Hulk, through the paper, sword drawn. Our molasses Ninja hubby wrecks the place up and lops loverboy's arm off and then his head. Next, he slashes the Geisha-wife's throat and kills her as well. Then, after doing in her musical instrument - dude, she wasn't that bad- he commits harikiri and... credits.

Well, that was a depressing way to open a movie... and being that it's based on a novel, this doesn't bode well for the rest of the film.


We then go to present day, where American Diplomat Alex, played by Doug "Not Troy" McClure, goes to meet the arriving Fletcher clan: Ted (Edward Albert), Laura (Susan George), and their daughter Amy. Doug McClure was always a little cheesy, and has only become cheesier in retrospect. He's charming here, but the relationships between him and the Fletchers seem forced. Susan George doesn't even have the chemistry with him that she has with Edward Albert's moustache...

We immediately have some exposition to clarify that a) Doug's single, b) he rented them the murder house, and c) the rent's cheap. Ted and Laura like the little place - mostly because it has a western-style toilet - even if they'll be on the traditional sleeping mats.

Those of us with bad, trick backs are both curious and apprehensive about the mat-on-the-floor lifestyle. 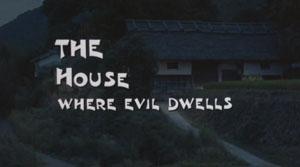 That first night, a sake cup breaks, then a lamp turns itself off. That's... fairly normal. Explainable. They're also visited by the ghosts of the trio from the beginning of the movie... who, I might add, seem awful chummy. Evidently it only takes 140 years to get over your differences and become one happy, murdered menage a trois. After the startling shock of seeing ghosts, only a suntanned, soft-focus love scene will do. These two sun-worshippers look like they're well on their way to "alligator handbag" status. Personally, by what I've seen so far, one can only assume George thought "eh, I take my kit off, I get some cash and a vacation in Japan."

The next morning, Ted meets a Japanese magical-elderly-exposition man, the traditionally-dressed Monk neighbor who stopped by to let them know he had visions and that they're DOOMED. Laura, meanwhile, is finding the little carving of the beast lovers. Has no one cleaned this house since 1840??? Weird tones and chimes are the musical cue for weirdness, and then the ghosts are visiting to pop into Laura.

Yeah, you can check out now because they're just going to play out what happened to the ghost trio aren't they? Oh my goodness, this movie is totally THE GRUDGE...

At one point, Ted takes photos of the ghost wife, but she doesn't show up on the slides. After, Laura makes Alex uncomfortable with a thinly-veiled come-on over the phone that makes him grimace. Of course, she's fulla ghost, and once ghost-girl climbs out of her she's equally disgusted with the thought that she's just been suggestive to Doug McClure. Later, at a cheesy, dated smooth jazz diplomacy party, Alex is creepily excited to see the blank and apprehensive Laura. All he really cares about is finding out if he's hit the jackpot, and since the ghosts of Japanese housewives can evidently turn you into a nymphomaniac, he finds out he has. Really, he's not a very good friend of Ted's but, hey, that's okay as he's off to a Geisha bar anyhow. It's implied the ghost visits him through the geisha and says her name is Otami.

The next day, Laura's inflicted with housewife-appropriate tortures like ghosts opening the taps on her while Otami and the boys play keepaway with a severely hung-over Ted and his decorative-yet-functional Samauri sword. If you think this reads tediously, you should try watching this... or better yet, don't. Laura buys some masks after some heavy-handed exposition about Noh masks and theater. A demon mask, a devil mask, and a girl mask. I assume this is to tie in to how they're reenacting the love triangle? Gee, it's awful subtle.

Ted's now ready to go to the mad exposition Monk and hear about how the movie opened. Otami fell in love with her husband's student. When hubby found out he killed them, but not before a flashback where Otami visits an annoying giggly witch and stabbed her. This is where she got the beast carving and, I'd assume, whatever curse turned them into killer ghosts.

Then comes the hilarity: They're at the dinner table and Amy (remember her?) see's a ghost guy's big blue face mugging (and I mean just hamming it up) in her soup. 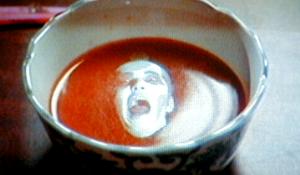 Upset, she cries, provoking Ted to say "eat your soup for daddy." The ghost then makes Ted force-feed the child the soup. The next morning, Amy's withdrawn and upset, and Ted's off to a business trip. This means Laura must immediately get her some doug McClure lovin' in a scene that shows you more of him than you'd ever wish to see, with cut-aways to the demon carving and mask. Talk about heavy handed.

So, Ted goes off photographing pearl divers. One of these girls in white smocks turns into a topless Otami - and toplessness is the whole reason for this scene - which causes Ted to fall into the drink... where the underwater shots and his closeups clearly prove to be a swimming pool and not the bay the boat was in. Kind of undermines that sense of danger, there, eh?

When she gets the call to go see him in the hospital, Laura promptly freaks out, which would send the already skittish Amy over the top in real life. But just in case it didn't, while the grownups are gone, Amy and her babysitter are attacked by crabs, including two enormous mechanical puppets which moan in ghost voices. Babysitter sensibly beats a hasty retreat, while Amy dicks around in the garden and winds up fallilng out of a tree and in the hospital.

Wow, this is a crappy movie.

Amy gets shipped out of the story back to the states, leaving our trio to their crazy, crappy endgame. After some time-filling hysterics, Ted's had enough and decides they're going home the next day. But first he has to get them all killed first.

He gets the Monk to perform an exorcism on the house, which drives the melodramatically complaining ghosts out. The Monk requests - very clearly, mind you - that they not let anyone in and leaves, as the ghosts are stuck bitching on the front porch. Hot mess Laura chooses this time to wig out and confess her affair... which is, conveniently right when Alex shows up. Ted lets him... and the ghosts in. What a maroon. 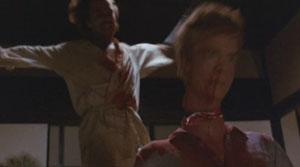 You know exactly what happens next. The boys have a fist-fight, refereed by the ghosts who enter everyone's bodies - turning Ted into a karate machine. When McClure gets possessed by the student, it kinda fits because he's not very graceful. Well, the swords come out, and after a few thrusts and parries, Alex loses his head. Ted then gores Laura and then keri-s his hairy.

Our lovely cast dead and piled up like the bodies at the end of Flesh For Frankenstein, the ghosts hop out of their bodies and scurry off out the front door and into the windy, credit-roll filled evening.
...
Really, this was quite worse than I remembered. Evidently it was just the sheer doom of the downer ending that must've stuck with me because this was 40 minutes of movie with 44 minutes of filler and atonal music.