31 Flavors of Horror #18: The Haunting of Amelia

Well, they can't all be winners - this film, reviewed for Exploitation Retrospect wants to surprise with it's few chills and twist ending, but it gives up it's secrets early. If not for some ooey-gooey make up effects, this would play more like an "After-school Special" with a twist than the attractive TV actor's Twilight Zone story it'd like to be taken as.

However, the gentle chills it holds are still worth sharing with you. Anyhow, it's a Tuesday. No one expects big thrills and chills on a Tuesday!

31 Flavors of Horror #18
The Haunting of Amelia 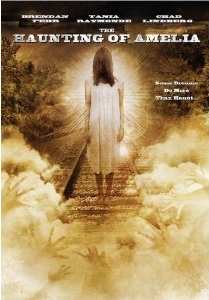 After the last ten years or so of the Asian Horror Invasion, it's understandable that you'd look at the box cover, featuring some ghostly girl staring out ominously through a thick fall of hair, and think “Score, horror movie!” You've just been horribly mislead. Once you see the PG-13 emblazoned on it, you'll know for sure. There's a dearth of horror here, and romance, though these seem to be the genres aimed for. This is really more a coming of age drama with a supernatural bent.

If the maudlin adult contemporary songs don't send you running, there's a story here. Rusty (Chad Lindberg) returns for a high school reunion after a decade away. Meanwhile, his friend Josh (Brendan Fehr) stayed, unmotivated, traumatized and shuffling through life like a semi-catatonic. While Rusty tires to spark a little life into him, Josh is paralyzed by memories of his high school girlfriend who died in a train accident.

(gentle horror gets gentle spoilers ahead)

When a dead ringer for her named Amelia (Tania Raymonde) shows up, he starts to come around a little. She applies to the diner he works at, but really seems there mostly to be an impossibly lovely and engaging option for this awkward, silent, shuffler of a man. Men in real life who lurk in run down houses and obsessively walk the tracks instead of live their lives do not tend to meet women of that caliber.

Weird casting with the perfect-as-always Shirley Knight, a steady Sam Robards, and the diner-owning medium played surprisingly well by MAD TV's Stephnie Weir. LOST's Raymonde and Fehr, best known for time served on Roswell, make for an engaging pair, if not an involving romance plot. A weirder subplot, involving the niece of Weir's character trying to seduce a nurse into euthanize her uncle, is shoehorned in as gracefully as the filmmakers can, but the fit is awkward. It all comes together in a low-budget but fair looking, shot on video way.

There's a line about 16 minutes in, “Can you be a little more blunt?” When I think I've predicted what the twists of the story by then, based on little dialogue and just a few cues, I'd guess it means I've seen too many movies. I've seen too many episodes of The Twilight Zone, too. While watching you may have inklings of what's going on. By 33 minutes in, I was certain, so if you haven't figured out The Haunting of Amelia by then, let us know and we'll assign you some movie homework. (That's kinder than saying you're thick as a plank.) It's all fairly obvious, to the point that I think they changed the title from The Other Side of the Tracks because it was too much of a clue.

Perhaps the new twist ending should be no twist at all?
Posted by Jay at 10:00 AM