I liked Vampire Circus so much that, even though I wrote this review for DVD Snapshot back in April, I saved presenting it on my own site until October so it could be part of the 31 Flavors of Horror. I also thought it should be one of the titles doing double duty as a One A Week Review.


This Hammer Horror came in a Blu-Ray and DVD combo pack chock-full of goodies and it's definitely worth getting your hands on. A seriously fun, old-school movie watching experience.
31 Flavors of Horror #15:
Vampire Circus 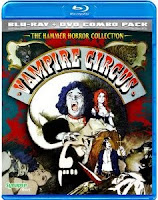 A little girl is brutally slain by a vampire in a tiny 10th century Austrian village. Seeking revenge, the townspeople invade the foreboding castle of Count Mitterhaus and kill him for the crime. As the Count died, he curses the villagers and vows their children will all die so that he may someday return to life. Fifteen years later, as the village is ravaged by the plague, a traveling circus comes to town and distracts the villagers from their current hardships. Little do they know that their troubles are only beginning! The circus is actually a troupe of shape-shifting vampires and, as the local children start disappearing, they realize the prophecy of the long dead Count is coming true. Synapse Films is proud to present Vampire Circus, now available for the first time on home video in glorious 1080p high-definition and loaded with amazing extras you can really sink your teeth into!


The above synopsis accurately captures the prologue of Vampire Circus, but neglects to mention the dark sexuality implied in it. A mother feeding her own child to her vampire lover is just as deliciously wrong now as in 1971. When the aggressively lascivious circus folk roll in to the already plague-ridden Austrian berg where our tale is set, the line between staid old-guard values and Seventies permissiveness is clearly drawn. Will our staid Burgermeister be able to uphold the society's conventions against a circus featuring a writhing body-painted snake woman and dark-eyed panther boy? How can he when they can seduce every local lady in sight?

Our gypsy vamps have a score to settle with the townsfolk, and they're willing to seduce and slaughter their way through it. The thick, pinkish theatrical blood splashes across the screen as they eliminate the children, seduce those ripe maidens, and devour those foolish enough to attempt escape through the forest. Between shifting shapes, biting necks, and drawing unwitting victims into their magic mirror (well-done tricks here), this vampire tale plays with a dreamy style that evokes Black Sunday as much as the Dracula series. 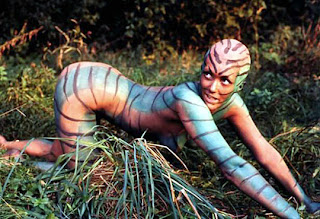 Vampire Circus is late Hammer Horror at it's best. Unintentionally funny in points, and filled with archaic optical effects enhanced by the HD cleanup, this is a rare treat. A curio from the studio that set almost all of their stagey-yet-entertaining horror stories in the comfortably distant 1880s. With the lush artificiality of studio sets and over-baked costumes, there's no pretense that there's anything but a nice Saturday afternoon distraction in the offing. Even so, the surprising moments of grisly maggot-ridden bodies and ripe eroticism startle, as they're shoehorned into the aesthetic and formulas established in the more restrained, older Hammer titles. Best of all might be the most savage torch-wielding villagers ever committed to film. They kick off the serious bloodbath of a third act.

Hammer films without Christopher Lee or Peter Cushing seem like also-rans, but perhaps this campy circus, with it's sexy Freudian touches wasn't something to associate their stars with. Here, Hammer regulars Thorley Walters and bodybuilder David Prowse appear along with Adrienne Corri, perhaps best known for her turn as Mrs. Alexander in A Clockwork Orange. Our count here, Robert Tayman, appeared in The Stud and House of Whipcord, and Lalla Ward is best known from Doctor Who.

The very look of Vampire Circus allows the dream logic and directly physical horror moments to play startlingly well. If you grew up on these old Hammer Films on rainy Saturdays, this is the one to enjoy now that you're an adult. 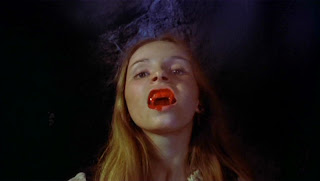 The low-budget limitations and Mono soundtrack aside, this edition of Vampire Circus looks terrific. On Blu-Ray the colors are clear, if dark, and occasionally they pop. Early on, a ruby-red bottle of wine is impossibly rich. Later, the subtleties of a chapel set's murals stand out in gorgeous relief. From muddy-brown vampire make-up splotches to flaming torches, the detail is terrific. Dark cinematography means this is probably the best this film has ever looked on home video. The detail of many night scenes would be completely lost on VHS. There is some film grain, but no artifacting was noted. The audio is crisp and clean, though mono 2.0. About the only surprise is a lack of any subtitles.

Vampire Circus is a downright dreamy and thrillingly sensual subversive treat wrapped in the comforting cloak of a stage-bound Hammer Horror. The associations of it's more restrained Sixties kin adds to the effectiveness. It's hammy, but if you're willing to pop this into your player, you're already aware of the conventions. If totally inexperienced with the films of the time period, try it out. This is a perverse, entertaining, sophisticated surprise. Underrated and recommended.

Overall Picture:
Movie: B+
Video: A
Audio: A
Extras: A-