Ok, so in retrospect, maybe the nudity wasn't quite as wall to wall in Piranha as I initially remembered it to be - but it sure makes an impression. It's also more distributed to the distaff side of things, and I'm a proponent of "naked parity" in films, but I've heard many a complaint over the years that movies just don't pack the gratuitous nudity that they did in the Seventies and Eighties. Well, whiners, this one's for you.

Besides, what's better for a playful, fun "Humpday" than a fun, sleazy, party flick like this?

This whole ethos of this movie can be summed up in three words: "Underwater Lesbian Ballet."

This flick is about gore and nudity- like, we're talking skin levels out of an 80s sex comedy. Seriously, there are a LOT of boobs in this movie. There's also some truly excellent gore effects.
The most stunning effect, for me, even happens just in the background, like a throwaway moment. 2 men are helping a woman out of the water by carrying here and her ravaged torso just splits in half. She even reacts for a moment before fizzling out. Just savage. Swarms of CGI fishies strip bodies down to gristle and reddened bone in seconds.

And, oh, those fish - pardon my French, but those are some ugly fuckin' fish. My first thought is if they've been down there, underground living and evolving for a million years they woulda probably evolved their eyes out of the picture by now. I think they have their eyes still so they can best see all the 3D breasts (have I mentioned there's a LOTTA nudity in this yet?).

So, we have great gore and great globes, what else is there? A great cast!

(More about that great cast, and their respective gizzards, after the jump...) 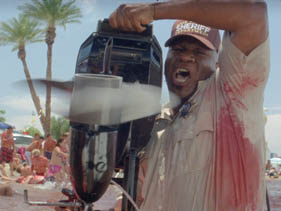 Elizabeth Shue gamely plays it as straight as one can as the law in a one lake town beholden to Spring Break partiers. She's got tongue firmly in cheek, and is good as always, but looks like she's having more fun here than she's had in quite a while. Richard Dreyfuss shows up for what is essentially a throwaway Jaws joke. One with bad CGI whirlpools, no less! Christopher Lloyd pulls out the crazy here in  another cameo, practically playing Doc Brown, if the good Doc wanted to make an aquarium that traveled through time. Ricardo Chiavra and Dina Meyer show up in "why the hell are you even in this movie" cameos.

Also, thrill to Riley Steele coughing up a fanged tuna! Ving Rhames says "I'm too old for this!" Kelly Brook and her gorgeous McGorgeousness! (Seriously, holy hot damn, you never see nudity like this any more in movies.) Jerry O'Connell, his coke nose, and his detachable penis! Eli Roth and his smashed, smug gourd! This movie is as much fun for the people watching as it is for the semi-devoured people watching. Piranha is a thrill a minute, with every story beat carrying exclamation points!

Sadly this film is saddled with one handicap: two children who can't act, and who're acting twice their age. Solely here to be "children in jeopardy," you're kinda bummed when they, you know, make it to the end of the movie. They're about the only factor detracting from the short, sharp, silly, nasty little party crowd-pleaser.

Personally,  I spent this whole movie waiting for the guy who threw his Slushie at one character's Pixies T-Shirt to die. Hard. (He's almost as bad as the wimp who steals a boat and winds up killing more people than the damn piranha did.) Thankfully, no crime goes unpunished in Piranha.

Check it out - in this case, a cave of piranha is more fun than a barrel of monkeys.
Posted by Jay at 10:00 AM