Ha! It's Friday and I just know you were expecting another Friday the 13th review, but I thought I'd do the (really not at all) unpredictable and mix it up a bit here for the 31 Flavors of Horror. However it is a remake, which is practically the same as a sequel, street cred-wise.

This redux of Night of the Demons has some painfully dumb moments, but there's some flashy graphics and lots of fun to be had. When I actually wrote this, quite a while back, there was a lot going on. It was a few days before my birthday, I was snowed in, and I also had a friendship limp to an end that day. There's a story there probably more interesting than any told by this movie.

Angela's throwing a party in an abandoned mansion in New Orleans this time around, and this time the guest list is full of ho-bags. The reheated Night of the Demons is all loud noises, jump-scares, and decent gore. It's lots of noise but is there payoff?

Monica Keena is the lead, but Diora Baird and Bobbi Sue Luther are her pals. Are they here to just be shameless eye candy and characters we don't have to invest in? Their first conversation involves Brazilian waxes. so 'nuff said.

(A few spoilers after the break)


Baird really is so pretty it hurts, and she looks to be having a wonderful time when she's a demon. Keena's gotten those injection fish-lips, and they are starting to look normal again, but they can't compete against the swell of Luther's cleavage. They're pretty much just a trio of pretty girls who go to Angela's (Shannon Elizabeth) party at the haunted Broussard mansion. The big party ends when the cops show and they make an unfortunate choice to stick around with a couple of boys who're not nearly hot enough for them. They wind up trapped by demons, hunted, possessed, yadda-yadda-yadda. The gore is flashy, but the exposition gets shoe-horned in at the weirdest times. There's a little girl-on-girl kissing to titillate, and it pays off in my favorite gore effect in the movie- Luther getting her face bitten off and it landing on the floor, Halloween kitty-cat whiskers intact. There's also a lot of effects involving breasts. This flick is big on the monster-boobs. 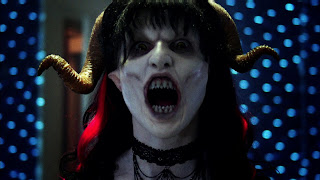 Edward Furlong is Keena's boyfriend Colin. He's bloated, dirty, and just unhealthy looking, all puffy eyes and yellow teeth. I will say that, as a drug dealer, he's certainly cast to type. Tiffany Shepis has a glorified cameo, coming off more badass than anyone else in the movie. Shannon Elizabeth leaves the poker table long enough to play Angela. She's a party promoter, plot expositioner, and general jackass. You're pretty much rooting for her to get offed from the moment she's introduced. Elizabeth is actually pretty good here. She's always seemed an actress game for whatever, and this performance is no exception. She's not as dewey-fresh as her American Pie days, but she's perhaps prettier now and not a visible plastic surgery victim. She's hidden under too much wig and makeup.

The big highlights for me? Linnea Quigley shows up to bend over (in homage to her introduction in the original), they resurrect my beloved Concrete Blonde's "Bloodletting" for a big musical cue, and they do a 2.0 version of the lipstick gag from the first film. The downside, one grindingly stupid ending. On the whole, had the movie ended about 20 minutes in when the cops showed up, it'd be a better party.
Posted by Jay at 10:00 AM