Many horror review bloggers - as opposed to those of us dilettantes who just fancy ourselves to be - are probably more original than I and not using the first Friday in October as an excuse to post a Friday the 13th review. I, however, am shameless and have absolutely no problem with it whatsoever. What can I say? I throw myself on the mercy of the court!

There's not much you haven't heard about this one, so I really just pinged out a few thoughts here about the cast. In the event that you haven't seen it... and if you're enough of a horror movie fan to bother to read even this far I'm going to assume you have... but if you haven't, check it out. Since this was made before most of the "slasher rules" were set it almost plays out like a very gruesome version of Ten Little Indians. Check it out -- the original is still the best! 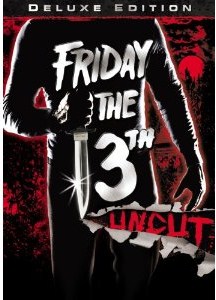 Here's what I never noticed before about Friday the 13th - just how dingy, drafty, damp and moldy that damn camp looks. Camp really does look like a miserable, cold place; full of dry-rotted wood and mud everywhere you look. It also seems to be a place so devoid of creature comforts that the killer shouldn't be blaming the counselors for shacking up. They're just trying to stay warm and stave off the boredom.

Anyhow, this hoary old chestnut, the one that started it all, has been reviewed to death. I'm not sure I'd have any new observations about it, even with this remastered, uncut version, but watching the DVD goosed up on a Blu-Ray player through an HDMI cable really brings the chill home. The sound of rain is constant once it gets started. The arrows through throats and axes to faces look darn good, too. This was the first time in years I'd watched it, and this uncut version does deliver a few extra (nice-looking) pumps of blood.

And *why* didn't Laurie Bartram have a film career? She's a strutting, sassing junior Paula Prentiss, gorgeous and personable. By far, she shows the most personality of any of the neophyte actors, including Kevin Bacon.

Adrienne King, who only recently returned to film acting after years of being harassed by a stalker, seems strongest in the scenes where she's alone or with Betsy Palmer. With the other counselors she tends to blend in, though that actually works for the mousy character and to give you the sense that maybe there just might be a question about who survives.

(Spoilers ahead)
In retrospect, her Alice is well-rounded, and not standing out too much makes her "final girl" (I hate that term) easier to relate to. One wonders what her career would have been like if she'd continued to appear in front of the cameras. Goodness knows she sells those awful, nonsensical final lines about as well as anyone could. Another thing I'd never noticed before is her strong resemblance to Kristy McNichol.

...and simple purposes of plot development aside, why the hell would Mrs. Voorhees bother to be nice to (or toy with) the last one left standing? It's purely for the audience and in the service of plot exposition... and don't give me any crap about spoilers, this is a 30 year old B-movie. She really does chew the scenery with those giant enamel Chiclets she's packing. All kidding aside, Betsy Palmer was an experienced film actress, and delivers a nice and tight four-minute descent into crazy. She may have gone around poo-pooing the role for decades, but it proves she's a pro and a trooper as she makes the movie's twists and turns work for the audience. I think it's why the last 20 minutes of the movie work as well as they do. (Also, this was before these slasher characters all became super-human. You'd be down for the count too when knocked in the head with a cast-iron skillet.) Seeing both King and Palmer today in the DVD extras takes a little steam out of that final battle thanks to their big, dazzling smiles. I'd much rather enjoy wine and snacks with these charming, laughing women than watch them continue to battle.

So, yeah, mass murders aside, camp is kinda gross and boring and middle-aged actresses might try and kill you. Best to stay out of the woods and pop this into the player instead. The original holds up.
Posted by Jay at 10:00 AM