Well, a few days ago we took a look at Terror Tract, so why not visit another TV movie? I know we're getting close to the end of the month, and you were probably expecting me to drag out some of the big, old iconic horror films everyone likes to namecheck this time of year... but instead I'm gonna bring you a class act that's a damn good watch.

This time, it's a classic from 1981 - the year the burlap sack mask was de rigeur, as Jason Voorhees was also sporting one in Friday the 13th Part Dos - and it still has legs, and a screenwriter J.D. Feigelson you may meet at horror cons (I've seen him at a couple HorrorHounds myself) generously offering writing workshops and discussing the film. It easy to see why a screenwriter may want to stay attached to a project that was directed by fellow screenwriter and novelist, Frank De Felitta (The Entity, Audrey Rose)


31 Flavors of Horror #29
Dark Night of the Scarecrow 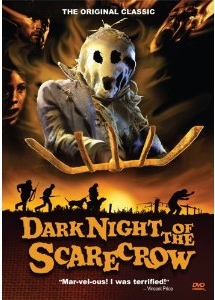 Larry Drake only ever seems to play two roles - mentally handicapped or malevolent. Here, he's Bubba, a man with developmental issues and a friendship with ten year old Marylee that's looked down upon by everyone's favorite evil-guy, Charles Durning. Otis Hazelrigg is a local postman and patented Durning creep, conspiring with another great 80s creep, Lane Smith, to just do in Bubba. Evidently his "difference," offends. Otis is jonesin' to kill 'im - and has every intention of engineering a way to get his way.

He gets his chance when Bubba breaks down a fence to save Marylee from a vicious garden gnome attack... okay, it's actually a dog, but since this was a TV-movie, a more "artful" choice was made to represent that. Bubba brings the bloody child home, and before you can say "Redneck Jackasses," assumptions are made and there's a posse riled up to lynch him.

The poor man-child runs home to his Mamma, but doesn't have time to explain, as she's got to stash him before the posse arrives.It's hard to be too intimidated by them. Four guys in the bright, California sunshine on the studio backlots. I assume they have to stop filming whenever the Duke boys drive through...

(Don't stop reading, because this one is worth watching)


While Mamma (Jocelyn Brando) tries to drive them off, they do find him, hiding as the scarecrow - his terrified eyes staring out of the holes of the burlap mask make for a genuinely disturbing image. They fill him full of lead, not sadly, right before it comes over the radio the girl survived a dog attack and he saved her life. Embarrassed by what they've done, they decide to just leave hiim up there as a scarecrow. I guess they're hoping country justice will cover their asses... but, hmm, there's an ill wind blowing while they contemplate what they've done.

After the commercial break (I love TV movies), we're all in the courtroom where the prosecutor is sensibly going after their vigilante asses. However, knowing that if the law does it's job and jails these premeditated murderers we don't have a story, the case is thrown out. Mamma objects, and the Prosecutor is ineffectually pissy, but nobody else gives a damn.

The Good 'ol Boys go out to drink 'n' hoot 'n' holler, while the ill-wind comes calling for poor little Marylee. She runs to visit her playmate, not knowing he's dead, and only finds Mamma at home. Mamma finds she has to break the news to Marylee, who misses her friend but doesn't understand what she's being told. It's really a fine scene. Well written and acted, and it ends on a genuinely creepy note.

Life goes on in their little town, and one day Smith's character's wife off-handedly asks about a scarecrow propped up in the empty field... it's another very well done reveal, and it's why I'm going to step away from my usual ramble-through of the storyline. There's a lot of great scenes here. One highlight is a nice tete-a-tete between Durning and Brando - banter worth savoring that also ads a whole 'nother dimension to Otis' motives for doing what he did.

Don't dismiss Dark Night of the Scarecrow as a simple TV movie. It has all the aesthetic hallmarks of one - flat lighting, sometimes indifferent cinematography, and that particular pacing. It's also restrained in it's violence by TV's standards, and that actually serves it well. If you're heard about this one, know that what you've heard is true. This is a smart, creepy, well-made film. It may not thrill or scare you - though the final reveal is genuinely scary - but I think you'll find it akin to a handsomely written short story or novella you'd find a happy surprise when enjoyed on a lazy day. There's a reason it's available and discussed today and hundreds of other TV films have been long forgotten... It's a curio well worth checking out.
Posted by Jay at 10:00 AM