I love those old anthology horror films, from Asylum to Trilogy of Terror to Creepshow, they're always wonderful ways to pass a rainy afternoon or gloomy night. Usually a collection of morality tales with EC Comics-style twists, they're generally pretty oddball. I'm also a fan of the cheesy goodness of TV movies. So how can I turn down a double-dare like this?


Bonus: Will Estes, who plays Sean Goodwin, in 2005 starred in a little show called Reunion. That TV season was the year of the serial plot, since Lost was doing so well and I actually picked up a few shows that year and I watched a lot of TV then. When I backed Reunion, Commander-in-Chief, Surface, Point Pleasant, and Threshold only to see them ALL cancelled, I shifted my TV watching to pretty much DVDs of seasons so I wouldn't get "dumped" by TV shows like that again. The next year, I thought I'd give it one more shot and backed Kidnapped, Pepper Dennis and Vanished as promising. Needless to say, that's when I cancelled cable and went to an all-Netflix and DVD model of TV watching.

I will never understand the thinking of spending months and millions producing and marketing this stuff, only to cancel it within two weeks. Ridiculous business model. Anyhow, on to the fun TV movie... because THESE we need more of! 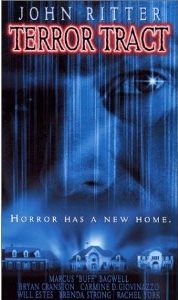 In my review of The House Where Evil Dwells, I opened with a paragraph that applies pretty well to this film as well:


"In both the movies and real life, a bitchin' piece of real estate will get snatched up off the market even if it is the site of multiple homicides. In the movies, however, they do tend to come with ghosts."


Terror Tract (aka The House on Terror Tract) is a TV-move trio of tales with a framing story involving a young couple (80s TV stalwarts David DeLuise and Allison Smith) getting shown a houses by their charming, but somewhat creepy, realtor John Ritter. He's very driven to close a sale.

The first house a lovely two-story with a bit of a Tudor flavor, but the owners aren't desperate to sell, you see, because they're dead! Bwahahahahahaha! ...and as real estate agents are bound to disclose a property's history, Ritter is only too happy to share.

The first story features those previous owners, the Freemonts. Louis leaves Sarah for his business trip, which is convenient or he would have run into her lover sneaking into the house. Of course, this is a morality tale, so you can guess just how far Louis actually traveled. Lou wants to kill them and make it look like a murder-suicide, but the tables get turned on him. As Sarah is about to find out, between guilt and suspicion, she hasn't quite gotten the last word after all.  His poor bod may be dead and dumped, but his cuckolded, furious spirit won't be stopped. Is he haunting her or is she imagining it?

Considering how the guilt of his death eats her up, you have to wonder if she was any fun at all while sneaking around...

Bobo
The second house is a tasteful blue two story with white trim and gables that belonged to the Gatleys. Ron is played by Bryan Cranston, and this character is a milquetoast. He's also a soft touch when it comes to his daughter, who's determined to adopt a monkey(!) she finds out in the yard. Bobo is a Capuchin with the full red suit, as if he'd come straight from his shift with the organ grinder. While Jennifer feels like she's got the world's best new playmate, the critter's downright nasty to everyone else.

Never mind it's completely illogical to let your child bring a stray primate into your house without getting it checked out by a vet, but that doesn't matter because Ron's rather whipped. No one's listening to his suspicions... or even a word he says. It's no wonder Jennifer starts listening to Bobo... and animals and people start getting very hurt...

Perhaps this is some sort of cautionary tale about not respecting the authority of your household's head?

Come to Granny
The modern, gray two story with three car garage and wide, brick walk also has a few secrets in it's stucco. Our realtor is giving the Goodwin house a really hard sell. Seems their son Sean was having some problems and wound up seeing local shrink Mary Alice Young... I mean, Dr. Corey (the long, lean, patrician Brenda Strong). Young Sean's been having visions of "The Granny Killer," a local serial killer who's running wild. The visions he's seeing are coming true... and the visions he sees include his girlfriend and Dr. Corey. So, is he psychic or psycho?

Who cares, that house has a pool!

The masked Granny is genuinely disturbing and this story actually generates some tension, but on the whole they're a pretty gentle trio of stories. The framing story also wraps up with a dark twist, though it's got tongue firmly in cheek as it does. Also, I don't care how horrible the murders are. Decent neighborhoods and good school systems attract buyers, even in today's crap market. These Portmanteau films are fun, and  Terror Tract has a pleasant cast, some hokey moments, and a collection of "Diet Tales From The Crypt" stories. I'd call this a definite "sick day" or "rainy day" choice, when nothing but a TV movie will do.
Posted by Jay at 10:00 AM