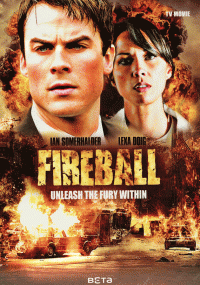 Ever watch a movie and get annoyed by some character trait that seems to be nothing more than some piece of business shoe-horned in by an actor in a fit of "inspiration?" You've seen it before. A limp, an accent, some truly bad hair, a facial tic. Something where the actor can say "I'm acting" while the crew stands aside, awkward and embarrassed because it's not worth anyone's job to stop them.
In Fireball, Ian Somerhalder's character has a repetitive shtick involving flicking a purposely-unfilled Zippo lighter to not light a cigarette, since his character is trying to quit smoking. While I'm sure he's a lovely and talented man; this, along with a performance that seems to be made of solely of poses and winces, makes for so rough going. It's hard to empathize with a movie when all you want to do is douse the pretty lead actor in gasoline and break out a proper Bic.
Fireball stars Somerhalder as a standard-B-movie-issue FBI agent ("Agent Cooper," no less) along with Lexa Doig (looking the same as she did in Jason X a decade ago, ageless and lovely) as a "book-smart" Fire Investigator in a little town that seems to have it's fair share of arson. You'll thrill to their perfectly pedestrian and chemistry-free character arc as they investigate crimes, have a cute date, and leap out of the way of a few fireballs!
Also starring is Alexis Paunovic as disgraced Football star Tyler Draven (no, I'm sure the screenwriter wasn't aping "Tyler Durden" of Fight Club here. Of course not...), who through a mix of "steroids keyed to his particular DNA sequence" and a chance encounter with a burning building winds up becoming a human match. He's capable of starting fires he uses to fulfill an agenda of petty vendettas, offing those he thinks have done him wrong. Clearly a man with some roid-rage issues, he's already a rampaging mess in a bad wig prior to becoming a state-of-the-low-budget-CGI-art Supervillain. At this point, while he should be heading off to do in the people he sees as ruining his career he instead decides to hunt witnesses, Judges, and a sleazy reporter who really does deserve it. Blowing up cars and propane tanks, he escalates to leaving smoldering footsteps in his wake and slagging bullets. Paunovic grimaces and growls out a series of profoundly stupid, quasi-religious one liners while mediocre special effects create hurling fireballs as he escalates from microwaving a hotel room to deciding to nuke a nuclear power plant.
The movie loses some points for a truly stupid "I know how to stop him" plan that involves getting Durden to stand completely still while they dump sand on him, and another plan which relies on sucking the oxygen out of a totally non-airtight room with a giant pit in the middle (one with a wobbling ring of "concrete" around it). The scene where they slice a fireball in half with an axe is more likable than you'd wish it to be. As a "show-stopper" effect, it charms a smidge more than it should. Shot on video and obviously low-budget, there's still some good photography here. The actors aren't bad. Things are just... not inspired. This is a "SyFy Premier" movie, and I'm always willing to give them a pass for their hokey and good-natured fun. I love these "Saturday Night Specials" and Fireball is no different... even if it lacks a giant sea beast, sand serpent, or half-man half-mantis creature.
Now, usually, it's not good to give away quite as many details about a film as we do here. I feel like I'm entitled to, however, because this is one of those flicks where the trailer gives away the entire movie. Seriously, it's a linear collection of every low highlight in the flick. If the filmmakers don't want to save anything to be enjoyed by the audience, I don't see any reason to. Don't get me wrong, Fireball is enjoyable, and a good "stay in with a few brews" flick, but if you're going to catch it, skip the previews.
Posted by Jay at 10:43 PM 1 comment: