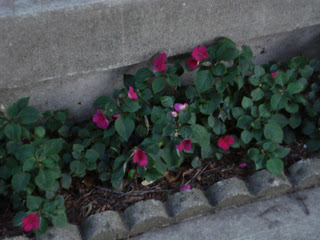 Just yesterday I took a couple pictures to show on my Flickr page just how much my flowers had grown over the last month. Tall. Healthy. Strong.

Then, today, I had the lovely pleasure of meeting a local drunken asshole named Bill...
***************
I was sitting at the computer and minding my own business around 1:30 or so
when there's a VERY loud, rapid pounding on my front door, immediately
followed by someone just LAYING into the doorbell.

I am completely irritated by this and, charged up, decided to get up and see what all the fuss was about.

On my porch was a drunk, unshaven, mostly toothless lout named Bill. He was drinking a Budweiser and carrying a Sav-A-Lot sack that looked to have at least 5 still-full beer cans in it.

I repeated my questions and was told "I wanna buy the house, come out and talk to me."

Now, I was pretty sure there was no house buying to be had with this turkey. I was eventually surprised to discover he had a home - or at least claimed to. But,you don't want to be too rude, or rather, I'm trying really hard not to be a complete jerk who does things like call other drivers in traffic names that'd make a Merchant Marine blush... so I stepped out onto the porch.

I really tried to present the "look, I'm busy and really don't have time to talk" argument. Evidently I didn't sell it well enough. In return I got "What, you're too good to talk? If you wanna sell the house you'll come sit down and talk to me." I stood my ground as he rambled on about knowing Geneva, the woman who built the place.

According to Bill at one point he tried to fix her up with a friend of his, but she thought she was "too good fer 'im."

Gee, color me shocked to hear that...

He asked me what I wanted "fer the joint," and I told him the list price.

Okay, sport. I said "You know, so far you've pounded my door, interrupted my day, and insulted me. This is over and you need to leave." Pretty firm of me. I started to retreat inside.

"Oh really, you think this is over?" he barks as he (thankfully) started to shuffle away "Well I hope you're ready fer the tax man!"

"Excuse me?"
I couldn't believe this unwashed, drunken lout was threatening to bring the city down on me. It was actually pretty amusing, as I have that whole elitist deed and full set of teeth thing going on... and the chances of him actually being EMPLOYED, much less by the city are significantly slimmer than Tyra naming me "America's Next Top Model."

"Well my taxes are fine, now excuse me" I said and started to shut the door. Now I was worried. Not that I believed he could bring the power of the city down on me, but rather that I have now pissed off the neighborhood drunken asshole and my phone's clear the other side of the house should I want to call District 5.

He said "I jus wanned to talk about Geenie, tha's all, don' letcher dog out..."

This, god help me, stopped me as I was shutting the door. "I don't have a dog."

"Well whutever that is..." he said, gesturing at my cat.

I then said "Listen, I apologize for being rude, but really, I have things to get to..." and he responded with:

"No yer right, I curse like a fuckin' mutherfucker' but I jus new Geenie sooo
well and loved this house and my stepdaughter has a cat juslike
that, is name is Patches, yers looks jus like 'er cat yew ever see that cat
onna backa the Metro, looks just like yer cat but has a mustache, is a boy
cat, a boy Patches."

He then proceeded to tell me he owns the apartment block catty-corner to The Comet (great, a neighbor). He just had garage doors with "Winders" put in, and it cost him a "fuckin' fortune." He brought up that you sign too many forms doing mortgage and equity stuff. Evidently his lawyer is really good, since he calls him whenever he "jus killed this guy an' he's out on my sideway." His lawyer also has a stuffed Piranha on his desk.

Sadly, Bill also got offended last night by a guy named "Brent" who mistook him for a beggar (all together now, "Really?"). "Yew ever see a piranha?" Good ol' Bill has a neighbor who drives sports cars. This neighbor has a sign that reads "If you are what you eat, then I'm a Porsche." 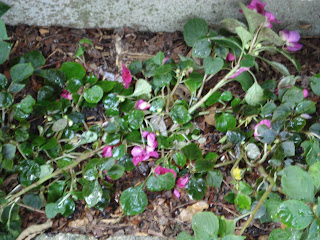 You wouldn't know it but Bill and his son in law think that's great because if Bill is what he eats then he's a "Big Ol' Pussy."

(I couldn't quite bring myself to buy that one... go figure )

Anyhow, he was all twitchy and pacy, but at least he was off the porch for this rant. I was just happy I'd soothed the drunken jackass enough that I hopefully wouldn't have to worry about him coming back and throwing a rock through a window or anything. He finally took off and I was able to shut the door. A few minutes later I stepped back out on the porch, phone in hand to try and at least share the "oh my gawd you wouldn't BELIEVE what happened to me" anecdote with someone... 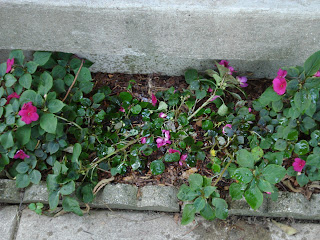 I didn't really realize that he must've been stomping into and out of the flowerbed while he was talking. But he had been -- either that or he came back and gave 'em a quick stomp when I shut the door. About three flower plants are just about completely crushed.
I am pretty annoyed. I'm trying to figure out if the possible loss of "Curb Appeal" is trumped by the anecdotal value of the drunken asshole impression I can whip out at the next 4 gatherings I'm at.
I watered them and will probably spray some plant food tonight and hopefully, just hopefully, they'll come back. Mostly I'd like to find me a lawyer with a piranha on his desk so I could call him and say "hey, I just kicked some toothless drunk guy's ass..."
Posted by Jay at 3:09 PM