Last night I was too crabby to properly enjoy the delicious camp of "Airport 1975" so I instead settled in with a flick I'd gotten in from Netflix called "Socket."

An odd film about a group of electrocution survivors turning to shocks to get continued thrills, I found it pretty well-done, especially considering it was one of those small budget, shot-on-video jobby jobs. It also has excellent editing.

I can only assume that the director really likes early David Cronenberg films as this is kind of "Crash-with-prongs." It's also a rarity as it's a gay-themed film from TLA Releasing that isn't about thin 20 year-olds coming to terms with their identities through lots and lots of sodomy, but rather about almost well-developed, somewhat mature characters who just happen to do a lot of full-frontal nudity. 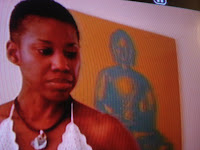 My biggest problem with it, though, happens about 5 minutes in. During a shot of best friend "Carol," (I call a character like this "The Handy Dyke," everyone should keep a few around the house, not unlike salt shakers, because you never know when you'll need repairs done), there's a shot of a"Blue Buddha" wall-hanging. It's a blue seated Buddha screened onto a mustard/gold fabric, it appealed to me without busting my budget.
Once you see something you own in a movie it can totally throw you out of it. "Hey, I have that picture! It's just like this is happening in my house, except for the hot guy full frontal nudity thing going on..." 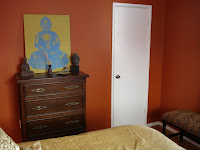 Mostly because I know those cheap set-dressers got the thing at Urban Outfitters for about $30 bucks. Jarring.
Also, I think it's the only piece of wall-art in the entire movie, which is minimally set-dressed all the way around, so I can only assume they were hiding a hole in the wall or something. The house is better than the incredibly dark, unsanitary, and underequipped hospital the characters work in. I hope they just dressed up someone's house to stand in for it, otherwise, these are all the kind of doctors who work "off-the-grid" for cash only, mostly fixing bullet holes and overdoses...
All in all, check it out. Enjoy the movie, stay for the art, thrill to saying "hey, Jay has really bad taste."
Posted by Jay at 11:42 AM