Much like some nudity, it's better than it looks 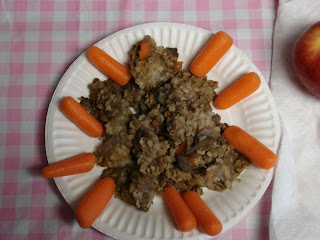 Lately, I've been preaching to people about this fab new recipe I bastardized and turned into a satisfying, filling - yet nigh fat free- lunch... and that is one terrible picture of it (like how I dress up the paper plate with some carrot sticks? Yeah, I'm the next "Top Chef," bitch).
Well, here's the general recipe for it. First, you're going to need your crock-pot - how suburban is THAT?- and the bigger, the better. Mine is about 3.5 quarts, I think. I've made this recipe at half what I'm about to list out, but if you do, don't half the veggies, garlic or pepper. Everything else can be halved. This stuff swells, so you don't want to fill her ALL the way up... (ah if I was younger, that would be SUCH a loaded sentence), and then you throw in the following:
2 CUPS DRY LENTILS - rinse 'em and look for rocks. Evidently there can be rocks in lentils. I've never personally encountered one, but don't blame me if you don't look then you chip your tooth, because I don't want to hear it... tho I do have a great dentist and I'll totally refer you.
2 CUPS BROWN RICE, chop up about a CUP OF CARROTS, 2 CHOPPED CELERY STALKS, and HALF to a WHOLE CHOPPED ONION. Throw that in, then pour in 6 CUPS WATER, 2 CUPS CHICKEN BROTH- you want about 8 cups liquid total, or at least until the pots full but you can mix that up. I used a whole 4 cup box of broth last time and it was pretty tasty (veggie broth works good too, but I'm not a big fan). Throw in about a teaspoon each of GARLIC POWDER, RED PEPPER FLAKES, GROUND BLACK PEPPER, and SALT (unless there's salt in the broth, then just throw in a pinch. Salt bad)
Plug in the slow cooker and set to low for about 7 hours. Then, throw in SLICED MUSHROOMS... at least a cup, I don't slice 'em thin and throw in about 2, but I really likes me my mushrooms, and cook for another hour on low. 8 hours total. You can shave about 2 hours off by cooking for an hour on high in the middle of the cooking process. You just have to keep an eye on it. It gets thick and clumpy-looking, but it's not sticky. There's almost no fat, you have enough to feed 2 people lunch all week. I swear 2 weeks of this stuff for lunch and I felt thinner. I dunno if I looked thinner, but I felt it... and sometimes that's all that's important.
Posted by Jay at 10:52 PM