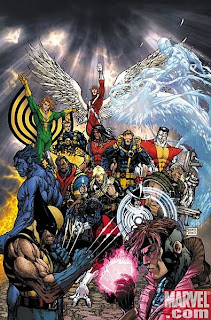 I'm not sure I was a fan of Michael Turner's style but it was certainly eye-popping. Lots of pneumatic girls and heavy, lacy line work. He was successful enough to have his own studio and a style that had imitators. I enjoyed the "Witchblade" television show and "Identity Crisis" covers. 37 is too young.
I grew up with comic books and find myself turning back to them recently - I'm sure the pressures of jobs and mortgages drive many back to their favorite juvenilia. Of course, that juvenilia is also possibly the only true pop media, stories that have continued and been shepherded by hundreds and hundreds of creators for decades, through good and bad, for an ever-renewing group of children with imaginations. Comics fans can have amazing passions. If you don't believe me, engage Nala on the subject of Power Girl.
I never knew much about the creators. I don't know if that is because of the "Studio system" major comics companies had, or if I was just always more enraptured by the creations. Occasionally stories about Dave Cockrum, Jim Aparo (I LOVED his art), Mike Weringo, and Steve Gerber show up in the media. They're just stories of people passing and belated kudos for being major American pop artists with thousands of fans and collectors who don't make the mainstream media. Such a shame.
UPDATE: I can't believe I almost forgot Dave Stevens, who gave us "The Rocketeer" and was pretty responsible for returning Bettie Page to popular culture for my generation.
Posted by Jay at 7:59 PM