One A Week Reviews #38: UFOs Do Not Exist! The Grand Deception and Cover Up of the UFO Phenomenon 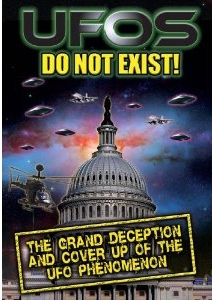 Reviewed for Exploitation Retrospect - this is such a no-go I'm mostly just posting my review to amuse and warn you off watching this claptrap...

Here's what I've always thought about conspiracy theories: If you really were on the path of hushed-up secret knowledge the powerful don't want you revealing, chances are good they would have shut your fat ass up long ago.

That said, for whatever reason, images of these big gray, blank-eyed aliens and the thought they might actually exist gives me no end of the heebie-jeebies...

This is not really a movie or a documentary. Bill Knell is some sort of paranormal researcher who's created a slide show assembled of third-hand stories, historical anecdotes, and huge leaps of logic. The tinny audio requires paying close attention, and he doesn't even edit his verbal stumblings.

For starters, the running time is actually 2 hours, not the 250 minutes claimed on the packaging. Why misrepresent it? If you can't even be honest about something as simple as that how can you be seen as credible about anything else? Blurry video, scanned photos, and paranoia do not a case make. He runs through his “credits,” but claiming appearances on public access shows and A Current Affair are kinda... well, cheesy. “I'm a guy who loves true stories of the paranormal.” (Sure, you are, sweetie. Sure you are....) If he were a younger man I wouldn't hesitate to assume he pieced this together in his mother's basement. However, I'd expect a younger man to be more technically adept. The awful pictures are oddly hypnotic. Sometimes you can't tell if it's an alien or just another grumpy old man in them, so bad is the image quality.

Did you know that Jackie Gleason was interested in UFOs? Evidently. Knell claims that Gleason claimed Richard Nixon arranged for him to see UFOs and alien bodies. I find undocumented stories shared second-hand about people who're dead to sometimes be suspicious, but this might explain why he wished to send Alice to the moon. (It's one thing to drag Nixon into this nonsense, but Walter Cronkite? Have you no shame?)

A brief history of UFO lore and side trip into The Philadelphia Experiment add up to a skimpy collection of non-facts. Forty years of bad photographs are just that, bad photographs. Until there is real proof we have nothing more than doctored photos and lens flare. Photos can “appear” to show all sorts of things, especially when they're this blurry. His travelogue of sneaking around old buildings couldn't be less interesting. The idea of a time-travel chair hidden in the hills of New York state is fun, but our host somehow takes all the thrill and sizzle out of the idea.

At once point our (ahem) trusty narrator Knell states:

“...being a paranormal researcher with years of experience, I've learned to always look at the bigger picture, not individual stories or pieces of evidence which are always subject to personal interpretation...”