One A Week Reviews #35: The Shuttered Room

This week I'm taking a thorough look at a B-movie on a very fun double feature disc, The Shuttered Room. The title sequence is surprisingly absorbing: A layered shot of lovely Carol Lynley just staring out a windshield, the reflected trees running past between us and her still face, with sputtering jazz propelling us along. Occasionally it splits into layers, making for a jittery effect. A splintered personality excellently depicted. Susannah and her new, older husband Mike (Gig Young) are returning to the old mill. a childhood home that haunts her. Being that this home is on Dunwich Island, a clear tip-off to anyone with even a passing acquaintance with Lovecraft. The story "The Shuttered Room" was evidently a "posthumous collaboration" between HP Lovecraft and August Derleth.

In other words, it's Lovecraft tropes adopted in a bit of a bait'n'switch. 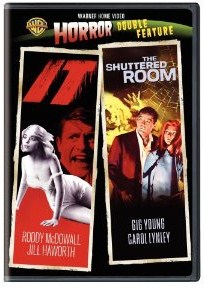 Upon arrival to Dunwich Island they're nearly immediately accosted by Oliver Reed and his band of merry idiots, overacting some juvenile irresponsibility. His characterization is all acting drunk and wearing tight pants. He must've been a wearisome man to have to put up with if he was anything like the role here. He's all about making faces and threatening rape. This bunch of inbred island-folk don't exactly roll out the welcome mat for long-lost daughter Susannah. Uncle Zubulon does his best to shoo 'em off, showing off a maimed compatriot. We already know there's something in a pitiful cabin locked behind a red and fancy door. As the isle seems populated solely with man-children and utter douchebags, whatever is behind there already seems more appealing than they are.

Anyhow, no one's very interested in Susannah claiming her property, not Ethan (Reed) nor Aunt Agatha (Dame Flora Robson). Old, patronizing, paternal hubby only seems to have one personality trait, "bemused," when dealing with young, fresh Lynley. He doesn't seem flexible enough to put up with the cobwebbed, dusty rattrap she's inherited. They're immediately dragged out by "Rapey Reed" to go see Aunt Agatha in her even less appealing watchtower home. She tells 'em that Susannah was sent away so as not to be affected by the Whatley curse. I assume it means she was sent away so as not to turn into a magnificent jackass. Aunt Aggie proves her jerkiness by going out of her way to tell Susannah how horribly her parents died.

For all this running around, they've had a pretty full day. Seems like the only sensible thing to do is unpack and stay in the big, nasty, ramshackle old mill that everyone has told them to get away from as soon as possible. Even more, it's already been proven that the island is populated exclusively with assholes. Anyone smart would head back to the mainland and sanity. Instead, Mike takes off and Susannah wanders around, taking a trip down a very cruddy memory lane. We know she shouldn't be there alone, and everyone in the movie knows she shouldn't be there alone, but Mike and Susannah? Dipshits.


Susannah goes walkabout on the jagged coast and comes upon what's essentially a gang-bang of Aunt Agatha's maid. It's a weird sequence, everyone stumbling after her on the rocks. The non-traditional jazz score kinda kills the dramatic tension. The giggly-slutty maid wanders off to tell smug ol' hubby his wife's in danger. At this point, things are feeling very 60s Jess Franco. It's not surprising this is a bit of an obscurity.

He rescues her, then gets some bad karate in with Ethan. He chucks the petty bully into the lake, then Aunt Agatha finishes the job of putting him in his place. So now the scene is set for the night everyone's told them not to spend in the Mill. Susannah's imagining her mother's ghost. The slutty maid breaks into their car looking to steal some nylons and winds up foolishly sneaking into the mill to try 'em on. We all know this is going to lead to her demise, but at least she gets to fondle her gams first. This scene is thankfully much tenser than the pursuit of Susannah. Aunt Agatha shows up too late to save her, but corrals the whatever that just killed her back into it's chains. Slow and plodding as this flick has been, looks like the last half hour might pick up a bit.

Our big city sad-sack leads survive the night and Mike the smug goes to confront Aunt Agatha about a left-behind glove. She claims she's made up the whole curse. On his way home he then gets ambushed by one of Ethan's crew of schmucky man-childs. Meanwhile, Susannah has inexplicably gone walkabout again. Considering her last venture nearly ended in rape you'd figure she's just get a treadmill. At least we get some nice seventies jazz album cover-worthy shots of Lynley amongst the leaves. She finally wanders up to the big red door we saw in the beginning. Whoever our chained whatsit is, they're at least able to bolt away without rattling until she's on her way out. She stumbles upon the dead maid, who I think was named Emma but I was never really sure, then runs into our favorite near-rapist.  His obsession with her lily-white womanhood is now getting downright tedious. Seeing his cronies have even set a trap to delay her hubby you have to assume they're now all playing for keeps. I'm unclear on the motivation. Do they plan to kill him? They're all going to jail for this when it's over, if he doesn't just outright shoot 'em. It's a bit nonsensical. You have to assume their sense of privilege comes from being the only people on their little island. It's either that or a lack of hobbies have left them without any perspective.

The cronies hogtie Mike in netting then come around to play at running him over with his own car. Never fear as the suave cityboy makes short worth of the bullies with his amazing kung-fu grip. Back at the house, we still have a mad monster in the attic, but the rest of this has turned into Straw Dogs. Susannah has the bright idea to take all the fun out of it for Ethan by... taking her top off and confronting him with the seeming reality of breasts. There's something spoiled and impotent going on there under all the Rapey Reed bluster. Both him and his boys go from bullies to shouting at the unfairness of their prey acting in any way not vulnerable at the drop of a hat. Anyhow, he finally winds up in the attic and gets confronted... and slashed by... a madwoman? So it's just a crazy bitch locked up in the attic? Not just that, it's a blurry, be-clawed Lynley in a dual role! None-too-poor Ethan winds up falling to his death, and Mike gets there just in time to find him. Susannah finally meets our attic madwoman. She tears up beautifully at the sight of her loony sister. Mike, patronizing to the end, says "I know, darling. Aunt Agatha told me." They then wander out to leave poor attic-Lynley chained up to burn in the fire Ethan started right before he died. They're some really classy people. Mike finally goes back to unlock The Other Sister while Aunt Agatha explains that she's too lazy to get the poor kid any psychiatric help. They can ship Susannah off to the big city, but nutty-chick gets to sit chained in her own filth for twenty years. Aunt Agatha further confirms she's a horrible caretaker by locking herself and crazy-sis up to burn to death in the now roaring Mill fire. Tidy plot wrap-up or a convenient dodge of people asking "Why, exactly, did you feel you couldn't get this child some proper mental health care?" Our New York ninnies watch the building burn down then, I assume, head on home to share this story with other smug bastards over dinner at Elaine's.

So the supernatural in The Shuttered Room is all a big dodge. It's a flick about scary rural rapists spiced up with a supposedly spooky madwoman-in-the-attic melodrama and some really inappropriate, yet very listenable, jazz. It's kind of a "meh," but I'm glad I gave it a watch... and saved you the trouble.
Posted by Jay at 12:26 AM