One A Week Reviews #34: The Pyjama Girl Case 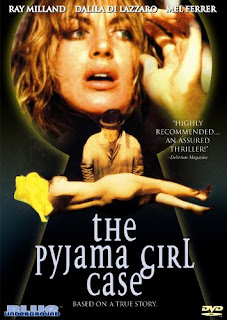 Washed-up - and usually alcoholic - American movie stars who couldn't get work in the Seventies were probably beyond grateful for the European film industry.They were still marketable enough with their faded marquee glory to get jobs, and since all the audio was dubbed, more than one soused performance was probably saved. In The Pyjama Girl Case, Ray Milland and Mel Ferrer headline here, and Milland especially looks like he's a couple sheets to the wind in every scene.

The Pyjama Girl Case - based on a sensational Australian murder case from the 1930's - starts when a breezy, lazy day on a Sydney Beach is soured by the discovery of a dead woman. Her face has been burned beyond recognizing, and all the police have to go on are the yellow jammies she was wearing. Ray Milland plays the Inspector, doggedly working to solve the murder, even though it means visiting now-quaint video arcades and stopping peeping toms. The decision is made to display her nude body and destroyed face for a leering, morbid parade of spectators in the hopes someone will recognize her - the film's signature image.

While this is all going on, we also get to know Linda (Dalila Di Lazzaro) as she juggles several relationships in her very complicated love life, starting with Ferrer's character. Will she be the next victim?

(...and thar be possible spoilers ahead!)


Movie conventions and linear storytelling get twisted up by The Pyjama Girl Case, an Australia-set giallo that's equal parts shoe leather police procedural and melodrama of failed romances. The slow pace and attention to Milland's investigation lend things a melancholy air that's enhanced by Linda's romantic disappointments (Di Lazzaro really is very good in this, convincingly heartbreaking). The sequence of the morbid crowd who gather to see the Pyjama Girl's body as if it were an art installation and the woman convinced it's her daughter (for her own agenda) tip the story into a far more melancholy space than the typical giallo murder thriller. The Pyjama Girl Case winds up being a slow and satisfying police procedural. It's also a pretty sad one, only occasionally undercut by it's disco score.

I won't spoil the details of the film any further, but while it's streaming on Netflix, you may wish to choose the DVD instead. There's a short featurette on the real murder case that both compliments and enhances the effect of the film.

This might be the only giallo I've ever seen where you actually wind up feeling something for the characters. Worth a watch.
Posted by Jay at 12:01 AM