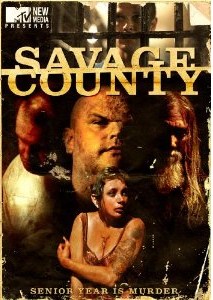 
This choppy construction may hail from the film's slightly convoluted backstory: A web series accessorized with companion blog and online game then turned into a TV movie by MTV2, and now released "unrated" on DVD. We're only viewing the final product, but this very "Web 2.0" journey is worth mentioning. Shots are usually tightly framed in a monitor-friendly manner -only the finale seems really "cinematic"- and there are a variety of flashy visual styles. To Savage County's credit, the film is well-made and I would have loved it in my teens. Unfortunately, the journey taken must've taken a little too long because everyone else beat the filmmakers to their content.

This is a gentle, not too graphic pass at "Torture Porn" for the MTV generation., but with totally by-the-numbers plot construction: A group of stereotyped(1) teens(2) fall afoul of a crazy, rural, backwoods family(3) with bad hygiene and housekeeping skills(4) who wind up torturing(5) and murdering(6) the lot of 'em, as graphically(7) as the film can get away with. (Normally, it's more graphic than this, but they acquit themselves nicely for TV film.) There's some unnecessary subplots (like a pregnancy and a character's video podcast), a rapidly rising bodycount, and some rednecks who're awfully cavalier about their enormous vat of acid.

However, all of this has been done to death. Besides The Texas Chainsaw Massacre, Hostel, and Wrong Turn series; Motel Hell, Deliverance, Mother's Day, Madman, and House of 1.000 Corpses come to mind. I bet with time you can come up with at least ten more titles. You can find several films with variations of the plot points reviewed on this site. This reviewer contributed The Shortcut, Staunton Hill, Shadow, Backwoods, The Hills Run Red, Train, Live Animals, and Summer's Moon.

I'll give it credit, as scenes featuring a lawnmower and sander made me cringe, but there's nothing here that many of you haven't seen before. Repeatedly. Ad nauseum. Savage County's saving graces are that it's  flashy, kinetic, and good-looking, but it's beyond time to retire the "crazy rural, backwoods family "genre.

Special Features:
Presented in Widescreen and in English 2.0 Dolby Digital audio, the only extra is the (rather well-done) trailer for the film.

Conclusion:
There's enough aesthetic flash to keep the DVD playing but Savage County's target audience is those who haven't seen all the other crazy redneck movies... and whatever teens still watch MTV2.