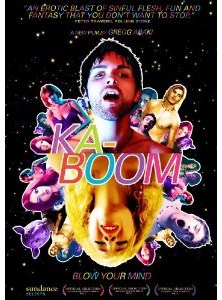 
Gregg Araki always gathers great casts, but they don't seem quite up to it here. His regular stand-in, James Duval, having aged out of playing a college aged protagonist, shows up as a stoned RA and he's always a welcome appearance. Thomas Dekker wanders around like a more focused and clearly ambisexual version of Duval's protagonists in Nowhere and The Doom Generation. Haley Bennett as side-kick Stella seems to be channeling Rose McGowan- who bit into, ripped apart, and spat out Araki's dialogue like it was the end of a cigar - but not quite getting there. This might be a projection as McGowan will always be the greatest snarling, snapping deliverer of twenty-something attitude. Juno Temple's London seems like the worst qualities of both Beckys from Roseanne, but with a Brit accent and loose morals. Chris Zylka's Thor, the uber-male, unconsciously homoerotic roommate, has more to do in the deleted scenes than in the main storyline, but he's mostly here so we can appreciate his ass over his character development, anyhow.

The roundelay of sexual confusion would work better without the pre-apocalyptic overtones, but they layer of ominousness they ad helps with recall the scary unknown of adolescence. The contrived mystery doesn't really go anywhere and the ending is a major cop-out, but it's still a stylish trip. The Lynch styling and outta-left-field curveballs in the plot don't help. The closing credits montage of images capture more tone and theme than the last five minutes of contrived mystery plot. Obtuse and "odd image with loud droning tone" are not a good substitute for real mystery. Did I even mention in Araki-world there's a witch and some zipless fucks? The film climaxes to a song by Placebo, perhaps the band that matches most the sleek style and sexually ambiguous tension of much of Araki's film stylings.

The post-adolescent overwhelming sensuality, Araki's hallmark and usually reminiscent of an overripe fruit (or boil) about to burst, is dampened a bit here. I'd chalk that up to the now fifty-something director's branching out to broader topics, but I think it frustrated me. I expected another Nowhere or Doom Generation, and to be transported back to that overwhelming, hormone-addled, supercharged emotional state. Having those cues here, but cooled with a maturity and mystery, left me feeling let down. I appreciate Kaboom, and it's worth a watch, but it didn't get me, to use a term apropos for any Gregg Araki film, "off" in the way he used to...
Posted by Jay at 9:15 AM