Another dvdsnapshot.com by yours truly, and a "Cheat" Yucky Movie for October as I watched in the last weekend of September, but I hope you'll allow me to turn you on to a nasty little number perfect for Halloween viewing. In the end, my only real quibble with this one is it needed a bigger body count...

(and if you haven't checked it out yet - shame on you if you haven't - over at Live For Films they're doing 31 days of Horror reviews - I like my October scary movies, but I don't know if I've the stamina for that!) 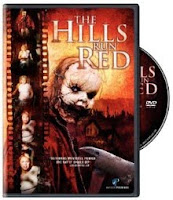 OFFICIAL SYNOPSIS:
You heard the story. The one about the goriest, bloodiest splatter fest ever, the one made in the '80s but mysteriously lost. Flash forward to now: Young fright fans search for the secret location where the movie was shot, hoping to find the film. What they fin is that the mysterious slasher flick is more than a movie. It's real. And they're its newest stars. The Hills Run Red with a whole new level of horror as the terrified cinephiles confront a demented killer who wears a nightmarish babydoll mask. Wait, Babyface is just a character from the movie, right? Wrong. He's alive. He's waiting. And he's thrilled to meet fans who will die - slowly, gruesomely, shockingly - for his art. Roll camera!

OUR TAKE:
One of the best parts of being a movie fan is that every year, more and more obscure titles are being issued by labels like Lionsgate, Anchor Bay, and Blue Underground. Trashy grindhouse fare from the 70s and 80s, buffed to sparkle and packed with extras. I know they must hunt far and wide for the elements to assemble quality editions of the films, but I hope the people who work at digging up the prints of such fare never encounter a title like The Hills Run Red.

A "lost" 80's slasher, explained in a title card at the beginning of the film, was pulled for being too realistic and sadistic. It's director was never heard from again. One young obsessed fan hunts down the director's daughter, a junkie stripper who seems the very stereotype of "daddy issues," and uses her to lead him and 2 friends out into the woods, documenting his search for the lost classic. They get a heck of a lot more than they bargained for.

Trashy, gory, and filled with more topless shots than most horror films from the last twenty years, The Hills Run Red is a pretty successful "slasher flick". Filled with twists and reverses and a stream of patter about film that rivals Scream without being as showy, this is an accomplished grue-fest, highly polished and definitely rewatchable. Sophie Monk, an Australian singer, is the star here and acquits herself nicely. Looking like Patsy Kensit with a collagen problem, she's unafraid to doff her top and wallow in the gore. I think we'll see her again in bigger things. William Sadler pops up to remind us he should be working more often.

Some too-rosy CGI blood and some over-done flashbacks can jar, but on the whole this ride is smoother than most straight-to-video fare you see. Their reproduction of the look of an 80's slasher film is almost as good at capturing the feel as the trailers in Grindhouse were. There's moments here where I thought of flicks like Madman, Texas Chainsaw Massacre 3 and Motel Hell, so I applaud the filmmakers on a job well done.

SPECIAL FEATURES:
Not many special features. There's a commentary with Director Dave Parker, Writer David J. Schow and Producer Robert Meyer Burnett and a 28 minute making-of diary-style featurette,
It's Not Real Until You Shoot It: Making The Hills Run Red. The Audio available is either 5.1 Dolby English and Portuguese. Subtitles available in English, French, Portuguese, Spanish, and Japanese.

CONCLUSION:
The Hills Run Red isn't for kids or the squeamish, but it's an 80 minute delight for the gorehound in your life. A twisted and nasty little slasher flick, it's a step above most straight to video titles, both polished and perverse. If you like this sort of thing, this one comes highly recommended.

OVERALL PICTURE:
MOVIE: B+
EXTRAS: B-