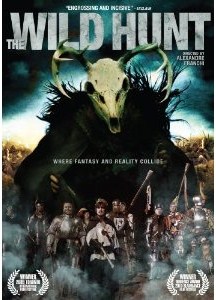 There's a lot of humor here, and the audience also shares Erik's frustration of not being in on the joke. However, when tempers flare and third act violence kicks in. For the lightness of the earlier scenes, the film closes on some surprisingly dark, though satisfying, notes.

I enjoy the Ren Fest as much as the next guy, but – like the next guy – I start feeling darn awkward whenever anyone wants to conduct a long conversation in character. (The mocking is strong with this one). However, this is mostly because I'm too shy and restrained to let loose and play such games. I'm not surprised you can squeeze a film out of the idea that someone engaging in “Live Action Role Play” can snap and take the game to far.

Special Features:
The Wild Hunt is presented in Widescreen with English 2.0 Dolby Digital audio. Extras include a set of featurettes of Festival events and a set of “Making of” clips. There are also a set of storyboards and the trailer.

Conclusion:
There's nothing that objectionable in The Wild Hunt except for 2011 hipster ennui and a very slow start... except for, you know, some nasty third act bloodshed. Escapism escapes society's escapees to be replaced with delusion and violence. Well-made and surprisingly satisfying with a chilling finish.