One A Week Reviews #23: Three Kingdoms: Resurrection of the Dragon 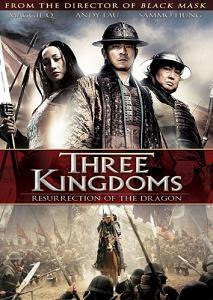 A huge, gorgeous historical epic that feels like it's either on fast forward or cut down to 100 minutes from 240? Don't mind if I do. Dvdsnapshot.com had me check out this good-time eye candy, and it's certainly defferent enough from the day to day to be worth a watch.

THREE KINGDOMS: RESURRECTION OF THE DRAGON

OFFICIAL SYNOPSIS:
In 228 AD, a time when China was plagued by constant war and divided among three kingdoms, a hero would arise. Zhao Zilong was a common man who rose from humble roots to command the army charged with liberating the land from an evil warlord. He engaged in numerous battles of strength and wit, but now he must fight back against the impossible to defy the fate of his nation.

OUR TAKE:
From the opening credits, played against a background of roiling storm clouds, to a gracious CGI prologue of an old map setting up the legend that fades into warring sides facing one another on a battlefield strewn with bodies, you know that with Three Kingdoms you're in for Grade-A Sweeping Historical Drama.

As three different kingdoms face off in historical China, Zhao Zilong is a "hero on a journey," in the tradition of Luke Skywalker, who we follow as he grows to be a great general. This is mostly telegraphed because the storytelling is fast moving, simplistic, and pretty choppy. The narration by Sammo Hung's sidekick character Ping-An, covers gaps in the action as it plays over wide vistas and quick-cut action sequences. Almost every shot is so epic it gets draining after a while. Too many men, too much scenery. If anything it feels like a film cut down in length by half, with scenes so condensed that their length doesn't justify the magnificence of the staging. The warfare is darn pretty though, with sweeping knives and blood spurting in slow motion. An early scene of staff-fighting is especially engaging. Also, that's the first time the story slows down to breathe for a minute. A later fight, with a wound you'd be unlikely to survive and a baby involved, inter-cut as it is with the slow-motion death of a horse is just too, too much. Another sequence where Zilong makes very quick work of the sons of an opposing army's leader makes excellent use of the films economy of pace and decent fight choreography.  All in all, pretty exhilarating.

The development of hte romance in the film is so slight as to be not worth including. In fact, when Maggie Q's character shows up again, an hour into the film, it's so howlingly nonsensical  you wish they'd just left her behind. Characters come and go in an instant, banished as soon as they're introduced. The interest here is not story-telling, but in massive fight scenes and beautiful ceremonies with an enormous, well-costumed cast. That said, there's nothing wrong with that. This is a gorgeous, easy watch, even if it moves so quickly the story barely registers. Both Andy Lau and Maggie Q are easy on the eyes, and Hung displays the charm that's made him a well-loved figure in International cinema. For gorgeous visuals and decent action, this is a nice way to while away 100 minutes.

SPECIAL FEATURES:
Three Kingdoms is presented widescreen with audio in both the default Mandarin and dubbed English 5.1 Dolby Digital. Subtitles are available in English and Spanish. Extras include interviews with director Daniel Lee along with stars Andy Lau, Sammo Hung, and Maggie Q. Trailers are included for Three Kingdoms, along with Unrivaled, Wrong Side of Town, Fireball, Jackie Chan Presents: Wushu, and Jade Warrior.

CONCLUSION:
There's nothing wrong with "Sweeping Historical Epics" but this lush production of Chinese warfare is stunning eye-candy, but glances over the surface of the story like a pebble skipping on a lake. A film overripe in the best tradition of Hollywood biblical films of the 50s. Too violent for the kids and perhaps a little bloody for teens, Three Kingdoms is still certainly worth a watch if you're in the mood for a "quickie epic" of 3rd Century warfare.