Jay's One A Week Reviews #25: Vamp Vixens (with a surprising twist at the end)

Read to the bottom, as that's where I "Buried the Lead," as it were...

The kind and lovely people over at MVD Entertainment Group saw my review of their recent release I Am Virgin and most generously proceeded to send me a big ol' box of fab DVDs for my perusal and review. Typically, I took that opportunity to flake out for a month and am only now turning my weary, bleary little eyes back to their box of delights. 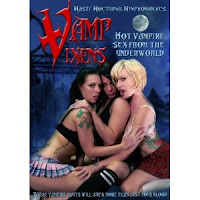 What can I say about the oddity Vamp Vixens? As it launched from a menu featuring a gal with plastic fangs and silicone implants and into credits that state it's "Hosted by Mistress Luna Moon" (her given name, I'm sure), I wondered what was in store.

What I didn't expect is a woman in a leather getup and Betty Page bangs lisping around her mouthful of fake vampire teeth introducing a series of vignettes... which turn out to be all the sex scenes that felt shoe-horned in to I Am Virgin. It's no wonder they felt so awkwardly injected into that film's storyline, as they're a kind of multi-purpose semi-porn. She has a "pet" man on a chain and aims for the witty aside, a la Elvira, but doesn't add much spark to the dire, simulated, and very unconvincing scenes of (ahem) "erotica."

Ok, seriously, it does take marketing balls to sell this as a separate item. Kinda smart to repackage these soft-core sex scenes featuring tattooed, kinda "Suicide Girls"-style strippers simulating sex with each other or a couple of nondescript hunks who don't have much more presence than the gals do. Even in terms of appealing to those with the fetish for vampire-play or the near-"Rollergirl" look, I find it hard to imagine Vamp Vixens delivering for them.

Slowly paced and, yes, almost depicting intimacy on occasion, on the whole the aesthetic is just off. Dime-store Halloween fangs added to shot on video soft-core do not make it somehow hotter. Also, even though they have discretely labeled this DVD as being "Rated X," this is definitely soft-core. If you're going to watch adult programming designed with fetishes in mind, and something this completely lacking in storyline, you may as well go "balls out," as it were, and watch the real hard-core thing.

And now, the "surprising twist"...
In the end, I suppose you could play this in the background at parties and bars, but the only thing really recommending this DVD is the "special feature." Surprising and timely, the "Also from Brookland Brothers" link leads you first to the trailer for Palin: Erection 2008, a satire-porn featuring Stephen Hill, AKA Steve Driver, the porn actor who murdered a coworker and attacked two others with a prop samurai sword and then fell to his death off a cliff June 5th, 2010 after a 9-hour standoff with police that ended in a tasing that may or may not have contributed to his fall. A surprising coincidence to see the same day on a DVD in my home I'd received a month before. Ah, coincidence...
Posted by Jay at 10:16 PM