One A Week Reviews #21: Gamera, The Giant Monster 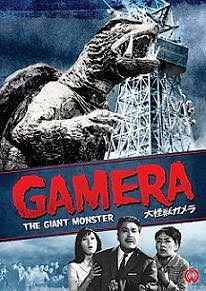 OFFICIAL SYNOPSIS:
During the height of the Cold War, East-West tensions lead to a nuclear disaster when a Soviet bomber is shot down over U.S. airspace in the Arctic! Massive radiation from the atomic explosion awakens an ancient gargantuan creature - a long-forgotten legend of the lost continent of Atlantis - GAMERA! Unleashed from it's glacial tomb and proving impervious to all man-made weapons, the colossal chelonian smashes a cataclysmic swath across the globe! Can the scientists of the world, lead by Dr. Hidaka (Eiji Funakoshi, Fires On The Plain), find a way to stop this invincible supermonster... or is mankind doomed?

Directed by Noriaki Yuasa (who would oversee all eight of the original Gamera entries of the 1960s and 1970s) and created by the same studio that bought Zatochi to the screen, Daiei's titanic terrapin became the only true rival to Toho's King of the Monsters. Gamera was able to hold its own at the box office and secured a place in the hearts of kaiju eiga (Japanese monster movie) fans around the world.

Now, for the first time on DVD, Shout! Factory presents the original Japanese version of Gamera with new English subtitles and anamorphic widescreen from an all-new HD master created from vault elements!

OUR TAKE:
The 1965 Daiei studios answer to Toho's successful Godzilla was a giant atomic turtle from Atlantis who becomes Japan's defender of children named Gamera, who went on to star in his own long-running series of films. The later, color features from the 60s and 70s were Saturday staples of my own childhood, and while I could never make much sense of them, many reflect on them with warm, indulgent nostalgia. So how does the original hold up after all these years?

The action here just jumps right in with showing off it's incredible model-work as a group of Japanese scientists arrive by Jeep and Ice-breaker ship at an Eskimo encampment and immediately note a group of spy planes overhead.  I don't think it takes much reading-into of the channeling of Atomic-Age memories and fears involved when the US Air Force shoots down one of the spy planes, causing an explosive crash immediately assumed to be an Atomic Bomb test by the Japanese scientists. They release the Atlantean monster Gamera (in a still-impressive sequence that runs with the credits of the film), "The Devil's Envoy," who can breathe fire and fly by spinning while spraying Atomic-flame. He goes on and stomps his way through most of Japan while subplots featuring a group of scientists and a young woman and her turtle-obsessed little brother spin out in the best disaster-movie tradition.

Give yourself over from the beginning to the still eye-pleasing miniature special-effects shots right off the bat.  Sure, to the critical eye of 45 years later, the miniatures convince, and we've seen everything here perfected, but for the time -and even for now - the effects work. Gamera is a striking film visually, with some truly amazing sets and perspective work featuring the large Man-in-Suit turtle creature. The attack on Gamera staged at the thermal power plant is a delight for a film of any era.

I find it hard to judge performances in languages I don't speak, but the Japanese actors seem uniformly capable, talented, and to be enjoying themselves (The English-speaking actors are all uniformly awful). The storyline proves that the tropes of the disaster movie are truly universal.  There's some plot holes (I thought Japan couldn't have a standing army after WWII?), and really, a freeze bomb? But in the end who cares about that? An educational exercise in illustrating the Atomic Age fears of the cold war, along with a yarn of global destruction featuring a giant, fire-breathing turtle,  this is fun, nostalgic, quality film-making for the whole family from beginning to end.

SPECIAL FEATURES:
A terrific-looking remastered print arriving in handsome packaging, Gamera is presented Widescreen and includes a commentary track by August Ragone, the author of "Eiji Tsuburaya: Master of Monsters," the terrifically-engaging trailer, a Publicity Gallery, and the 23 minute featurette "A Look Back at Gamera," a loving and exhaustive look back at the history of the giant turtle and his films.  As an education on a genre of film most of us don't know enough about and for the playful recreation of an unproduced Gamera concept, this little featurette comes HIGHLY recommended.

CONCLUSION:
A film from 1965 that channeled Atomic-Age fears and memories of the A-bomb while simultaneously knocking off a film who did it first, Gamera could perhaps be considered just as timely for our Global Warming age. A handsome curio of still-pleasing cutting edge special effects for their time, the film holds up as a great entertainment treat. You really should catch it at least once.