One A Week Reviews #22: Never Take Candy From A Stranger

The DVD release of any Hammer film is cause for celebration for those of us who love them. This "Icons of Suspense Collection" includes four non-horror titles. I plan to see 'em all and review a few for you.

1960's Never Take Candy From A Stranger may be viewed as a departure for Hammer Studios. Known primarily in America for their horror pictures, they were in fact a full-fledged movie studio, not just a boutique outfit. As such, they branched out into all kinds of fare. 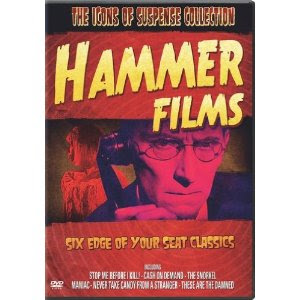 Racy and shocking for the day, Stranger is a Canada-set potboiler that's something like The Crucible for child molestation and adopted from a play named The Pony Cart that I've never heard of before this.

Little new-in-town Jean Carter loses her candy money and her friend Lucille says she knows what to do. This leads to Jean (rather blithely) telling her mother and school principal father (Sally and Peter) that the ominous Mr. Oldeberry made them dance nude in exchange for candy. Being that he's mentioned ominously in the very first scene, there's very little doubt that Clarence Oldeberry will turn out to be a monster par excellence.

The shock for a modern audience starts when realizing that Jean has no idea something inappropriate happened. Growing up in the age of "Stranger Danger," we always had the awareness that there were monsters outside, even if we grew up in suburban cocoons that blessedly left us more worried about the ones under our beds. Jean has no sense at all that there was an agenda going on that wasn't innocent. (That this is all old hat for Lucille is pretty disturbing, as well.) Also, Grandmother's dismissal of a flasher from her childhood strikes one because that's honestly how many dismiss some of the shocking peeks at the adult world they get as children. She would rather be stoic than rock the boat in their new city.

The police match Grandmother's attitude. The Carters are new and foreign and shouldn't be throwing accusations and drawing attention to citizens of long term social standing. Evidently the whole town knows Old Mister Oldeberry is a giant pervy letch-king but nobody bothered to tell them in time. The town doesn't understand why they didn't have the good sense to keep her away from there and people even start ostracizing Jean for what happened. Oldeberry's son is ready to turn the whole city against the Carters for doing nothing more than having the temerity to expose his father's actions. Was there always a code of silence in small towns to protect the crimes of their more eccentric and prominent citizenry? Probably...

In the end it's the Carters versus Society in a scandalous trial. Oldeberry just sits in the dock, not speaking, while the trial goes on around him. Lucille's parents seem so afraid to jeopardize the status quo they actually ship Lucille out of town so she doesn't have to attend.

For a stiff, mannered and reserved 60s film, the overall pace and especially the trial scenes are surprisingly gripping. I think my response is to the simple, clean, broadly-drawn depiction of a town closing up against exposure. Us versus them. Just as frustrating as all the stories of lawyers maneuvering and criminals released on technicalities are nowadays. Nothing like watching a lawyer try and take apart a child on the stand through goading and confusion. For a crisp, mannered British film, the sleaze oozes out of the oddest places.

I'm not going to spoil the outcome of the trial, or the surprisingly discomforting conclusion of the film, because I do recommend this one. Never Take Candy From A Stranger is engaging and unsettling. One reveal of Mr. Oldeberry shocks as much as if Freddy Krueger had shown up in his place. Also, it's a very contemporary story that plays at points like a leisurely, layman's edition of Law & Order. Sure, again, it is painted in broad strokes of black and white, both literally and figuratively, but the clear moral choices make the various character's shades of gray all the more involving.
Posted by Jay at 10:47 PM