One A Week Reviews #26: These Are The Damned

An "odd duck" that's part of the Hammer Icons of Suspense collection, These Are The Damned kicks off fast. With a jangly theme song called "Black Leather" that WILL unfortunately lodge itself into your brain, there's rapid-fire introductions to boring American tourist/Man of Mystery Macdonald Carey;dapper biker-thug Oliver Reed and his sassy, hip-swinging sister-moll, Shirley Ann Field with her inexplicable attraction to Carey; and exotic beatnik sculptress Viveca Lindfors. 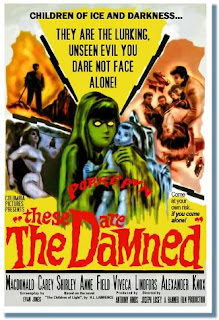 With gorgeous black and white cinematography and an intriguing English Seaside town setting, Damned is engaging from the get-go, where you're expecting a character story. Something about the wild youth of "today" rebelling against staid society, even if here it's represented by the stately, stuffy Carey. Oliver Reed, in an early role, is already expressing the magnetic lunacy that will make him a compelling and repelling screen presence for his whole career. You have the "dapper biker gang" trying to roll the American, but this little "social drama" soon turns when a military conspiracy is revealed. One involving a classroom of very sheltered, black-clad children (These "damned" are the aesthetic flip-side of the Village of the Damned kids).

It's all very intriguing and by 25 minutes in you're hooked, committed to find out just where the hell this is all going. The story goes from "social drama" (I keep turning to that phrase but I don't know how else to describe it's dynamic. Maybe "kitchen-sink drama"?) to chase thriller to Sci-Fi-W-T-F? while keeping a fair pace. It does drag in a few places, but that's acceptable in a nearly 50 year old film. You're not sure why Carey and Field get together beyond the perfunctory needs of the script, yet they have an oddly calm chemistry. Lindfors and Reed share a very interesting scene, something out of a social drama. They seem to be two very damaged kids who could just somehow make it work.

Joseph Losey was an accomplished director and here created a real below-the-radar gem. I can't recall encountering this film before, but I'm definitely glad to find it now. I'm not going to spoil too many of it's secrets because it's worth a watch. An artifact of the "Atomic Age" and a curious glimpse at early sixties youth counterculture, this is a unique film. Seek it out!
Posted by Jay at 9:05 AM

Email ThisBlogThis!Share to TwitterShare to FacebookShare to Pinterest
Labels: Hammer Horror, Macdonald Carey, Oliver Reed, One A Week Reviews, Shirley Ann Field, These Are The Damned, Village of the Damned, Viveca Lindfors