Creepy, freeky-deeky! This is a tre' tongue-in-cheek little monster movie I reviewed for dvdsnapshot.com. It's not great, but it's a great deal of fun and surprisingly fun to watch. 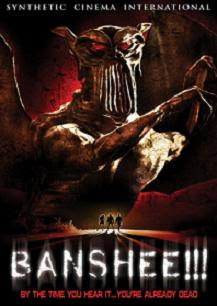 OFFICAL SYNOPSIS:
A group of college friends on a spring break camping trip are stalked and slashed by an unknown creature with the ability to make them hallucinate through sound waves. The survivors hold up refuge in an isolated farmhouse, cut off from all communication. Now, they have to come up with a plan to kill this unrelenting creature before it kills them. "Banshee!!!" takes the idea of the legendary Irish myth and spins in around into a terrifying and unstoppable monster!

OUR TAKE:
In the B-to-Z-grade horror film Banshee!!!, a logging crew in a backwoods town find a strange pod in a wrecked car around the same time a group of Co-Eds decide to take a camping trip. There's rumors of the titular monster lurking in the woods, having knocked a few guys off back in the Seventies, and the legend states you hear it before you die. Now its back and... y'all know this is going to end badly, right?

It does. The dialogue and acting here leave a lot to be desired but the big bad monster's fairly standard. This would be a total waste of time but for the genuine sense of style to the cinematography and effects. As an overall package, it's clear there's some talent behind the camera making the most of what they've got even if resources were limited. Low-grade CGI and occasionally flashy sound design are forgivable when you're having fun. The monster's sound power and ability to imitate people cuts down on CGI critter cheapness (it's very "insecty") and offers some genuinely witty moments. (The hilarious sight of the girl scout bludgeoning a man with an iron girder alone makes this worth at least a rental.) Banshee!!! is like a Syfy Channel monster-movie with half the budget and twice the cinematographic craft.

You also have to give them credit for not wasting time. The college kids are getting killed off within minutes of being introduced, and the film doesn't mess around front-loading set-up or backstory. Plot exposition is normally a lot more linear in this type of film. Here it's sprinkled through while the movie keeps a-trucking. Makes for disorienting, choppy pacing, but the film rolls to fast to pick at or care about it's faults.  They're upholding the contract of all B-grade horror movies. Namely, "you know they're meat, we know they're meat, so let's just knock 'em off, all right?"

SPECIAL FEATURES:
Banshee!!! offers English stereo and 5.1 Dolby Digital audio options along with a commentary track featuring the producer, writer, sound supervisor, and director. There are English and Spanish subtitles. The DVD extras include outtakes, bloopers, deleted scenes, and trailers for this and Assault of the Sasquatch.

CONCLUSION:
A low-budget, tongue in cheek monster movie, Banshee!!! has style to spare. While the flash and not-awful effects balance out the gawd-awful acting or overall Cheez-Whizzyness,  it's still not enough to make this a painless watch. (Doesn't make up for the three arbitrary exclamation points in the name either.) It's a 50s Monster Movie with cutting-edge gore and almost dadaist story structure.

While unrated, the gore makes this is one for the grown-ups. The less discerning ones, at least. On the whole, you can do a lot better, but there's some talent and charm here. A solid B for "beers and buddies," otherwise...