One A Week Reviews #13: The Brotherhood V: Alumni

Sigh, how do you explain the career of David DeCoteau?

Well, that's not fair to make it sound like a complaint. DeCoteau has been in the film-making game since the mid 1980s and has earned his place as a dependable director of low-budget slasher and soft-core films. Sorority Babes in the Slimeball Bowl-O-Rama and Creepozoids are two of his "classics." Perhaps his career highpoint is the earnest, gay-themed, B&W Leather Jacket Love Story. His films must always make money and he's had career success creating a niche market never before explored, the Homoerotic Horror Movie. Starting with a story set in a boarding school called Voodoo Academy through his now Six interchangeable Brotherhood  flicks. He's taking simplistic straight-to-video horror and jazzing it up with pretty guys who get naked; exposed and exploited just how women tend to be in your average horror movie. Lately, he's done a series in tandem with the Here! channel, but they're not much different from his now decade-plus run of tease epics. Now that Here! is involved the films are getting a bit more overtly gay, with out characters and subplots, but when it started he was just the beefcake king, and there's not much more sizzle than when they were stealth-gay. The average young straight guy horror viewer may not have totally tuned-in to what's going on, but the gay boys and little girls understood...

Mixing I Know What You Did Last Summer with a little Slaughter High, The Brotherhood V features a set of alumni called back to an intimate high school reunion after they covered up the murder of one of their cohorts during their senior prom. What makes a DeCoteau slasher film different from your average slasher is that it's a boy who takes a several-minute, totally-objectifying shower for absolutely no reason than for the camera to give us some T & just-the-slightest-hint-of-A. His name was "Leslie," by the way, just to further fiddle with the gender-twist happening here. There's also an African-American character named "Schwartz," but it feels less like stunt-casting than simply that these were the only actors willing to take the job. Schwartz goes on to shower, and two other male characters make out and undress with so little heat and so much space kept between them that you can only assume that the actors were either really straight or really, really didn't get along. This is the most insulting type of gay-content you can have in a film, when they're throwing you a bone and it's not even spirited. That's somehow worse than the cheap exploitation nudity we're used to. 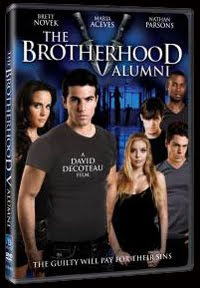 The six friends who were going to simply humiliate him on the Internet instead make a pact to cover up their involvement in the murder. A year later, these haggard-looking well-toned supposed teenagers reunite, invited back to the closed high-school*, immediately shuttered after the murder, with invitations from someone claiming to have the tape. Seems they taped themselves stabbing him after a masked killer did, a la Murder On The Orient Express, but they didn't know he was already dead when they got there. They're also not sharp enough to realize that whoever took this videotape had to have been one of them. They blame the bad boy who spent time in jail, but a more sensible crowd would have taken care of him, too.

Anyhow, this Sunnydale High, land of late 20's models as high school students. The character the film implies to be the killer from the get go. We can assume he is because he has the sloppiest haircut, least defined muscle-tone, and (greatest crime of all in a DeCoteau horror film) the least-sexy underwear.

This film is only 86 minutes long and feels incredibly padded. Seriously. One characters spends literally 5 minutes of screen time walking around a Science classroom very slowly. One in which all the lizards and fish are alive in even though the high school has been abandoned for a year.

Yay, logic. I've sat through films by Andrei Tarkovsky, king of the never-ending static shot, that play faster than this film does. There's perhaps a little mystery to the question "Who shot Leslie first" but when it comes to who the present-day killer is there's never a doubt.

So would I recommend The Brotherhood V? Absolutely not. This is almost a Manos, The Hands of Fate level debacle. Even if you watch this on fast-forward it's going to feel long. However, search out the first one, or Final Stab, The Frightening, or his other late 90s-early 2000s straight-to-video titles for better quasi-gay camp curios. You'll find much better gay-themed hororr if you pick up Hellbent or Cthulhu. Also, Leather Jacket Love Story I remember as being decent and honest and somewhat-sexy, but I saw it a decade ago...


*um, the idea they'd shutter a high school in what film-land logic leads us to assume is near Los Angeles over one piddly little murder just defies good sense. They didn't shutter Columbine, much less hundreds of other American schools where violence has happened. It's not only somehow massively offensive, but also a dumb-bunny plot point that sticks in one's craw from the get-go of the film.