This time my "One A Week Review" looks at a 1985 classic that's the first film by Gus Van Sant, better known for My Own Private Idaho, Good Will Hunting, and Milk.

Mala Noche is the first film by Gus Van Sant, from all the way back in 1985. An example of independent, outsider cinema breaking through to the public consciousness and something of a touchstone in gay cinema history. For a first, no-budget film, the cinematography is creative and energetic, the images are what immediately capture your attention. It's photographed with the sort of odd, mysterious shots and languid pacing that became a signature of Van Sant's films. I wonder what a film like Last Days or Paranoid Park would have been like with the same harshly-lit "noir" look. There's a more discerning visual eye in this black and white first film than those by a few directors of the same era who immediately spring to mind: Spike Lee, Kevin Smith, and Rose Troche. Scenes of wide vistas, a towering waterfall and sheets of rolling clouds stun in simple, stark black & white. He takes a convenience store and turns it into a charged, mysterious meeting place. 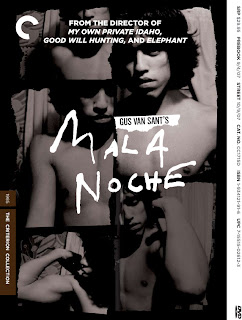 An odd story about a Portland, Oregon convenience store employee carrying a torch for an illegal immigrant who doesn't reciprocate his feelings, his blind lust is off-putting by 10 minutes into the movie. It turns into a weird path of self-degredation for the pursuer while to the pursued, the object of the affection, it's a nothing. Thankfully, neither character seems truly engaged enough in the game to bring that chase down from anything other than a lark. His language, background, orientation; his everything collide with a pair of immigrants through the course of the story. Though he scores the sexual contact he's desiring, the films more about the unusual dynamic between them as they attempt to bridge the distance than itis about depicting something explicit.

The actors in his films have become bigger names but the "slice-of-life" quality of encounters here, like those on the streets, a road trip, or dancing at a dinner party, are the sort of events that thread through all his stories. The sound design and visuals can remind one of David Lynch at times. The behavior of the lead boys wouldn't be out of place in a Gregg Araki movie. Mala Noche is hypnotizing, and while lesser-known, a groundbreaking piece of cinema from the Eighties. The film is more haunting and absorbing than you'd think it would have a right to be. I can see the world of My Own Private Idaho here but I can also see the visual flare of Drugstore Cowboy and Even Cowgirls Get The Blues. Van Sant hit the ground running.
Posted by Jay at 10:13 PM