One A Week Reviews #12: Woodchipper Massacre 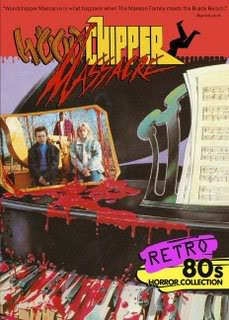 Well, first you can say that it's watchable, with the plot of Don't Tell Mom The Babysitter's Dead coupled with the coup de grace from Fargo. Call it "Kids do the darndest murders?" When cantankerous Aunt Tess comes to babysit Tom, Denice, and Jon, she quickly makes their lives miserable in the way only indulged children can suffer. Before too long, she accidentally gets killed and this genius trio of siblings decide the only sensible thing is to freeze her and put her through a woodchipper. Evidently this was inspired by a local crime, and was pretty ingenious for its time. They wind up having to follow up their cover-up of her death by committing murder and then the cutsiest clean-up of a crime scene you've ever seen. Why, it's downright whimsical.

The overacting is nearly as stunning as the eighties fashions. Aunt Tess is played by the director/leading man's mother, evidently on the grounds that she never thought anyone would ever see the film. The kids all mug for the camera like a silent-film after-school special. Every line is shouted by a cast that's local theater talent all the way. This film burns the eyes, does drag quite a bit, and there's no real massacre.

Beyond that all I can say is it's honestly worth eyeballing. Maybe not sitting all the way through, but if you enjoy "cult" and truly bizarre films you need to at least see a little of this.While everything about it is amaturish, they can at least crow that they not only made it, but got it distributed to boot. Furthermore, the film's absurdity and sense of fun puts it up there in the top tiers of "WTF Cinema." You'll spend the entire time wondering "why?" and "what were they thinking?"

I loved this film like I love The Room and Troll 2, and for many of the same absurdist reasons.

Actually, this is better than The Room. It's crap, but it's also a curio. Check it out.

"When this gets out I'll probably be kicked out of the Girl Scouts! They'll make me give back my merit badges! I'll never be able to sell another cookie as long as I live! Oh, what a lousy deal!"
Posted by Jay at 7:28 PM

Email ThisBlogThis!Share to TwitterShare to FacebookShare to Pinterest
Labels: One A Week Reviews, Woodchipper Massacre