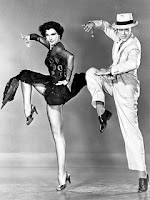 Cyd Charisse died. I'm not that familiar with her besides "Singin' in the Rain" and the Janet Jackson video "Alright." Sure, Janet's there, but then the classy older broad comes in, twirls, and steals the show. Janet Jackson always looks so stern dancing, aggressive and aerobic. Cyd Charisse was 67 when she made this and moves so smoothly, so joyfully, she kinda puts Janet to shame. It's not hard choreography, mind you, but she looks like she's having a great time.
All I know is, I can't believe she was only 5' 6" -- (I mean, Dude, look at those legs! She goes on for miles... decades... Seriously, I always thought she was 6' tall.)