I'm very excited to announce that the first edition of Jay's Prime Cuts is up at dvdsnapshot so please head over and check it out!

You're also going to find some other terrific columns by my new colleagues (I'm not used to having those, so this is most fun) Juan Shot Only, Jeff's REC Room, Tales From the Fourth Wall, and Videodrone.

There's really great interviews with people like Gary Cole and Jayma Mays and reviews galore to be found there. Editor Mike Spring also runs lots of contests and that's another excellent reason to check them out... not as awesome as our columns, in my humble opinion, but still pretty awesome.

I'll be posting the text of the first column here soon, but please go sneak peak at it at and maybe Mike'll ask me to write another one...
Posted by Jay at 8:46 AM 1 comment: 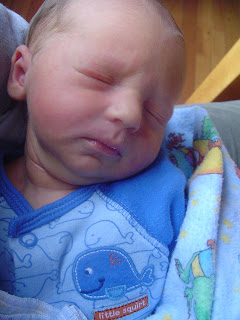 With all the business of the last week plus, I'm only now wrapping up my post from June 10th.

He arrived as a rousing success. Sebastian was born that afternoon, 20.5 inches long and 7 lbs, 3oz. While he got to go home two days later, the very next he went back to the hospital, stayed for two, then has gone back and forth since. Poor kid had that bilirubin problem, but seems to have overcome that. Now everything is working properly and he's home with his Mom, Dad, and big sister, Evelyn. Uncle Jay doesn't go up to visit until the start of July, but is already planning plenty of spoiling.
Posted by Jay at 3:06 PM No comments:

It's 8:55AM as I type this (just right now) and it's all I can do to not get up and pace. Now it's 8:56 and significantly harder to sit here. I'm in anticipation-mode and bouncing off the walls...

See, the baby is coming. My sister got in touch yesterday to let me know the doctor decided to check her into the hospital last night and induce labor. I'm not sure how I feel about ptocin, but I'm just happy to hear little nephew-man is on his way. Is he here yet? Is he still in there? I don't know... I'm not going to call and pester them -they're busy. They'll contact me when they're ready.

Knowing that doesn't make the waiting any easier.

Mom is on her way there -on a flight due in at 10AM. With renting a car she should reach the hospital by 11. Her, I can bother for updates. 10 can't get here fast enough.

In the meantime, I should re-confirm the quilt I'm having made now that I'll have an official birthdate soon, then go get my niece a special "I'm a big sister" present.
Posted by Jay at 8:55 AM No comments:

Call My Words A String Of Pearls

I had this song stuck in my head all morning so I thought it was best to just share it and get it out into the world.

Syd Straw worked solo, but may be best known for her work with the Golden Palaminos, and appearances on "The Adventures of Pete & Pete." From what I understand, she came from that same '80's Athens, GA scene that started with the B-52s and also brought us the Indigo Girls and REM.

She has a limber voice with a supple twang and I'm happy to own two of her CDs. I think my favorite tune of hers is this one, a duet with Michael Stipe from her first solo CD, "Surprise". I actually first discovered it on "The Edge of Rock," wich was a K-Tel-style compliation I picked up in High School also featuring Camper Van Beethoven, Lucinda Williams, Dinosaur Jr. and other early 90s acts.

Perhaps Getting Back To The Song O' The Day

A tip of the hat to EWPopWatch for Tweeting about this... the creator goes by the handle Fagottron and his work is simply "Expialidocious":

Email ThisBlogThis!Share to TwitterShare to FacebookShare to Pinterest
Labels: Song o' the day