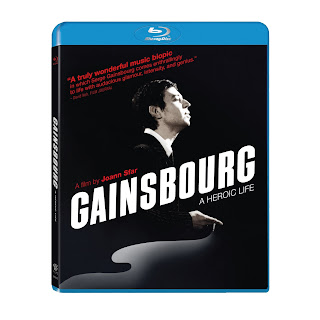 Through a childhood during the Nazi occupation to stardom as a gravel-voiced pop poet, Gainsbourg is presented as a sophisticated Lothario even in youth. First a painter (Sfar's own illustrations are used here), he grows to be one of the world's most popular musicians, thanks to his jaunty, unusual, and frequently frankly sexual songs. (There's a sly reference to the double-entendre “Lollipop” song, while “Je t'aime... moi non plus” gets a wittily uncomfortable airing.)
He tended to leave a path of burned bridges and self-destruction in his wake. Actor Eric Elmosnino captures the singer's self-destructive tendencies while keeping him a loveable rogue. He makes you believe this homely, conflicted, confident man could woo both the music world and his famous beauties. You also buy into his drunken decline and controversies.

The women in Gainsbourg's life smoldered as well. Supermodel Laetitia Casta makes for a luminous and pouty Brigitte Bardot even though her moves seem cribbed from Bardot's films. This famous fling, his children, and two other wives get short shrift, though. Jane Birkin, played by Lucy Gordon, is perhaps the great love of his life. (Many viewers will project a specter of tragedy on the performance as Gordon committed suicide before this film was released, but that shadow owes far more to the film's interpretation of their tempestuous relationship.) Less well-known to Americans is Juliette Greco, the singer and actress played by Anna Mouglalis, but you might well seek her out after this. In her brief role, she's a smoky man-eater as feline as her pet, who itself seems almost a familiar to her witch. He also frequently interacts with his own id, his fantasy “mug,” played by Doug Jones in a giant animated helmet of a head.

The actors (excepting Jones and his fantasy character) do a marvelous job of staying natural among the occasional flights of fancy. The songs, an omnipresent character in their own right, must be touched on, but their performances never stop the story. The flights of fancy? Occasionally precious, but never overwhelm the through-line of his life story. The major points of his life, marriages and children, come second to the depiction of the internal life of the artist.

Creative and playful, with Joann Sfar's illustrations come to life in brilliantly animated moments, Gainsbourg: A Heroic Life is a most unusual and original biography. Under Sfar's confident creative vision, this film captures a time, place, and style that's been stubbed out by the passage of time.

Also, the music is fantastic.

Gorgeous colors and crisp imagery in widescreen 2.35:1 makes Gainsbourg a beautiful watch. The audio presents the music cleanly and with surprising warmth. The music maintains presence even when the actors are clearly lip-synching.

An odd and sometimes uncomfortable mix of fantasy and fact, Gainsbourg: A Heroic Life is nevertheless delightful. A graphic novel come to life, and highly recommended.

Overall Picture:
Movie: A-
Video: A
Audio: A
Extra Features: B
Posted by Jay at 6:16 PM