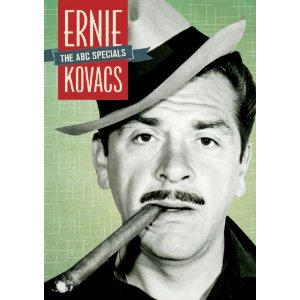 A combination of (frequently silent) slapstick vignettes and visual poetry set to music, these shot-on-video specials surprise with witty, quick jokes that rely on physical humor and absurd setups There is also occasional imagery that may well have inspired David Lynch (a roasted chicken dancing in kinescope or the series of faces during “The Story of Water,” anyone?)


What you don't expect when sitting down with this DVD is to see truly ahead-of-its-time experimental film. Kovacs pushed and played with video technology in ways that have been quoted ever since. To try and describe comedy is to kill the joke. Similarly, to try and describe pioneering video art can do a potential viewer a disservice. Sit down with these five short specials and be inspired, impressed, and amused. The specials are paced so nimbly you'll be amazed they were filmed so long ago.

Had Kovacs not died in an accident at 42, he would possibly have continued as a popular comedian and be better remembered today (the last episode here aired after his death). Judging from the quiet romanticism and truly dark humor of these specials, though, I think he would have gone the way of Woody Allen – from pratfalls and non sequiturs to aping Ingmar Bergman.

The image quality and audio here are pretty good for 50 year old television specials. The only extra here is a nearly 12-minute collection of commercials Kovacs did for Dutch Masters cigars.

Unexpected visual creativity in this combination of comedy specials that are a mash-up of low-budget movie musical numbers and MAD Magazine panels come to vivid videotaped life. Highly Recommended!