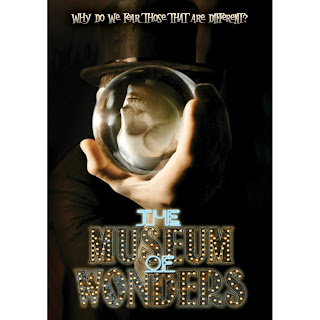 Essentially a retelling of Tod Browning's Freaks set among a side-show experimental theater company: Treacherous beauty wiles her way into the heart of a dwarf performer and, upon betraying him, faces the wrath of his true love and the extended family of oddities. There's still some lovingly photographed physical deformities (and the world's scrawniest strongman), but these sword-swallowers, bearded ladies, mimes and the rest make up a self-selected family of outsiders to which she doesn't really belong. Is it any wonder her transgressions must be punished?


The mannered dialogue has a formality designed to remind you of the philosophical, obtuse poetry of Neo-Realist film. Everyone speaks in a kind of obvious “profound non sequitur” that reminds you this is all theater (but this dialogue would never fly in one today). The story seems less propelled than adrift down its own river, more concerned with building this world than rushing its story. Along with Méliès' La Voyage Dans La Lune, the visuals evoke a perverse and bargain-basement Cirque du Soleil. Along with hints of silent film, Grand Guignol, and the Nine Inch Nails video “Closer;;” Cabaret, The Cook, The Thief, His Wife, and Her Lover, and even 1989's art-house Dr. Caligari are evoked here through strong choices and art direction. (While unrated, this is one for adults.)

As surreal and dreamy as the visuals, the actors vary in skill. Many being real “freaks” and circus performers, they can hold attention just by being on screen. As a company, though, they convey an overall style that suggests a strong “actor's director.” Domiziano Cristopharo is clearly a talent to watch, and proves to have a strong personal vision. For a casual viewer this may seem an “art-house mess." It can frustrate over the top choices. But focus past the capital-A “Art” non sequitur dialogue and stop-start pacing and the low-budget creativity of The Museum of Wonders weaves a spell through striking images, vivid style, and beautiful music.

This theater would never make money in our real world. Luckily it lives in a dreamworld of aesthetic outsiders.

The disc is fairly bare-bones, and had moments of visual artifiacting during the credits. Stereo Italian audio with automatic English subtitles and presented in full-framed 16x9, The Museum of Wonders has three extras:
Conclusion:

Domiziano Cristopharo's The Museum of Wonders has confident vision, over the top style, and artistic intention to burn. It's also a frustratingly over-the-top remake of Tod Browning's Freaks that won't hold appeal for many audiences.