One A Week Reviews #17: Leviathan 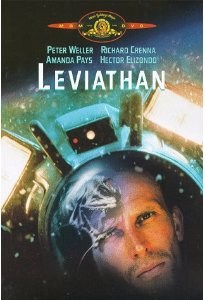 Leviathan: The other underwater movie from 1989 knocking off The Abyss that isn't DeepStar Six. Since I took a look at that one recently, I thought "why not see how the other half lives?"

As we suffered bravely and beautifully thru DeepStar, let's now take a look at MGM's crack at beating The Abyss to the punch. Let's start right with the opening. An MGM and De Laurentis Family presentation of a George P Cosmatos film with Peter Weller, Hector Elizondo, Lisa Eilbacher, Richard Crenna, Amanda Pays, Daniel Stern, Ernie Hudson, Meg Foster and some guy you've never heard of named Michael Carmine. Stan Winston effects. Jerry Goldsmith score. This is clearly the "middle" picture, budget-wise. The Abyss got the very luxe treatment and DeepStar Six was essentially the "Corman" crack at things. (Nowadays, that one would be from The Asylum and a year ahead of what it's knocking off.)

An aside about Michael Carmine: if he hadn't passed away at age thirty of heart failure, it's a good assumption you would be familiar with him. He's the only actor here who didn't have "name recognition," yet, but having appeared in Band of the Hand, Longtime Companion, and *batteries not included before his death. I get the impression he'd have enjoyed continued success.

16,000 feet down in the Atlantic, the crew of the Nostromo... sorry, I mean the Tri Oceanic Mining Corporation are digging up silver and other metals. There's a lot of "dry for wet" photography in this movie, where smoke, blue lighting and fluff in the air stand in for water. But there's no worries for this crew as they get to return to the surface in three days... or they did until they tempted the movie fates by stating that out loud. They also establish their white collar, sci-fi post-Alien bona fides sitting around the dinner table for colorful character interaction. Daniel Stern is the boor, Hector Elizondo the grown up, and Pays and Eilbacher split the sexy scientist spot.

Richard Crenna's doctor at least goes for "slick" over "grizzled." The always colorless Peter Weller plays the man in charge, who reports to topside boss Meg Foster. Her cool blues and cooler style are wasted in a part confined mostly to TV screens. Meanwhile,Weller has a lot of shots where he's speaking while looking directly into the camera. It's a tad disorienting and I think the film would have been much better had these two had swapped roles.

They putter around and squabble, filling time before we get to the good stuff. Between the clashing personalities and state of their facilities (so overplayed it may as well be "the gun in the first act"), by 20 minutes in we are CLAMORING for a monster. Anyhow, on what is their last day of drilling (equivalent to "I'm two weeks from retirement." in cop movies), Stern's character winds up falling off a ledge and down into a field of tubeworms (they're the most amusing effect here). When Pays goes to find him, they wind up discovering a sunken Russian vessel named "Leviathan." They find out that the crew must have died, but they did have some vodka on board.

Not just any vodka, though. Evil, mutation-causing vodka... yeah, let that soak in a minute.

Stern's character drinks it and soon enough is sprouting "organisms of unknown origin." You have to admit, liquor is one genius way to deliver the cooties. He drops promptly dead, though when Ernie Hudson comes in to talk to him, the sheet-covered lumpiness that was once the narrator of The Wonder Years starts moving around. Elibacher comes down with the rash next, but kills herself when she sees big, throbbing, put-spurting wounds on him. This is actually the sensible move, since he quickly turns into a giant, mutating bunch of muck that absorbs her into a gooey mess. Everyone else throws these "Bobbsey Twins of Yech "out into the ocean, but it leaves a chunk behind.

That big ol' ham-hock of critter starts regenerating itself, growing like a starfish.. What isn't lifted from Alien here comes straight from The Thing, but I love good, juicy body horror enough that I don't mind. While we watch lovely Amanda Pays look all nubile and vulnerable, poor Michael Carmine gets eaten by what is now a slimy, black lamprey-thing. (Good for him for not going first by virtue of being lowest-billed!)

Things now move on to a nice "armament montage" with Weller and Hudson, now the poor man's Kurt Russell and Keith David, try out a variety of handy tools for their weapon potential like they were members of The A-Team. Richard Crenna's jackass of a doctor considerately gets rid of their escape pods in a bitchy attempt to save the world from what they've found and from here on out it's our wholesome heroes versus slimy monsters. Hector Elizondo's "Hairy Palm 2.0" ensures he's outta the way and we wind up in a "three against one" human-calamari hybrid.

I'd personally rather face that than Meg Foster's breathily butch middle manager of evil.

An aside about Meg Foster: She attended the 2010 Horrorhound convention in Cincinnati. While I didn't get to speak with her, she was seen mingling with fans and generously giving everyone her time all weekend... and, even behind glasses, her eyes are as amazing in person as on the screen. She also sports some truly amazing arms.

The third act is all stuff you've seen before but still enjoyable. Lots of running around a set rife with steam and sparks, avoiding the slimy "Pumpkinhead-Catfish" made up of a few other characters. There's complete disregard for physics and biology with the underwater version of Alien's climax, but it all wraps up mercifully quick.

I would bet their arrival topside (and we'll just assume their diving suits can handle extremely rapid changes in pressure, mmmkay?) was even filmed in the same tank the climax of DeepStar Six was. I mean, it's pretty much the same ending with a monster that looks just as cheap in daylight as it was impressive on sets. Sadly, they knock off one last character more as plot contrivance than anything else, and the ending punch is stolen straight from the Die Hard films.

Verdict: Entertaining enough, icky, but finally forgettable. Being big budget doesn't make it special and, of the two, I think I'd return to the honest trash of DeepStar Six before the horror-movie-in-a-blender bigger bucks Leviathan.
Posted by Jay at 11:50 AM