One A Week Reviews #18: The Resident 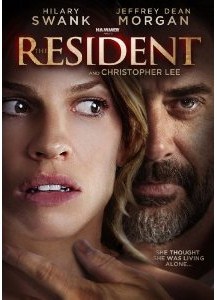 No wonder I don't live in New York. In The Resident, Hilary Swank is renting a gorgeous apartment at $3800 a month and that price is represented as a steal. I live in Ohio. I can't wrap my brain around that.

The landlord is dreamy, the rent is (supposedly) great, and there's even a kindly-but-dotty old Christoper Lee downstairs. This apartment is so fine, so much like home, it even brings out the exhibitionist in Swank, who lets the camera zoom a little too close into her sheer panties. (I guess that's part of play the subject of a voyeur's gaze is great and all, but, honey, you got Oscars. Plural. I don't need to see your landing strip.)

The Resident is getting press for being the new film from Hammer studios, and it got lavished with production dollars. Sadly, it went straight to DVD because, even with a guaranteed "opener" like Swank, we live in a world where Christopher Lee isn't recognized as one of the biggest box office stars of the 2000s (by virtue of Lord of the Rings and Star Wars movies. He's a bigger action villain than anyone else over the last decade). This, however, is a decent weeknight-in thriller that I think both male and female audiences would enjoy.

Swank is a young, single doctor who winds up in a mostly empty apartment building with a few creepy neighbors and a few creepier events. "Dreamy Landlord" (Jeffrey Dean Morgan) starts out "meeting cute" and being charming, and winds up being creepy-dreamy. Her ex, Jack (Lee Pace) straddles "creepy-dreamy" as well. Meanwhile, she engages in all the "quirky movie girl" habits like drinking wine from balloon glasses that make you look more waifish. She also has the unusually quirky trait of sleeping deeply, allowing for the cheesiest "man lurking over sleeping woman" scenes in history. One with sucked fingers.

Much like Audition, what starts as almost a cute, Meg Ryan-worthy dating story resets into something more. At the half-hour mark, the film rolls back to the beginning and fills in the gaps that make the men in Juliet's life so creepy-dreamy... and we find out why her apartment has been so cheap: It's an aquarium.

This hearkens back more to the crime shockers and slasher thrillers Hammer put out than their more famous supernatural monsters. Hidden dangers of the male kind surround our damsel in distress as she falls into the grasp of a family with a dangerous dynamic. For starters, they might use your toothbrush... eww.

There's a lot technically perfect about it, though that sheen is also a shell to keep us from getting too invested in The Resident. It's a little bit of The Collector, and a little Single White Female; a cat and mouse game with a dark walnut lacquer.You admire The Resident more than you enjoy it, because it's a cool, distant. The slow but creepy middle leads to an exciting third act, especially because Swank can act. The scenes of her "putting it together" and last moment "hammering" are worth investing your time here. Not too shabby by far.
Posted by Jay at 10:50 AM