One A Week Reviews #13: Sugar Boxx

This review for dvdsnapshot.com brought Sugar Boxx into my life. It's an affectionate tip of the hat to Women In Prison movies from the Sexploitation era and is undemanding trashy fun. Enjoy the review and see if you might be interested in giving the girls of Sugar State Women's Prison a spin. Just be warned that the timing of this being review #13 and on April Fool's Day is definitely appropriate... 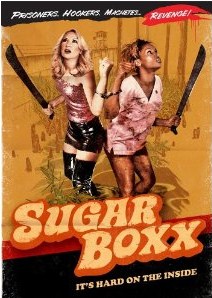 
Sexy reporter Valerie March (Geneviere Anderson) goes undercover inside Sugar State Women's Prison to expose a prostitution ring run by the sleazy and seductive warden (Linda Dona). But all hell breaks loose when the scantily-clad inmates decide to take bloody revenge on their captors.
Our take:
Let us now pay homage to the Women In Prison picture. Exploitation pictures from the seventies and eighties like The Big Doll House, The Big Bird Cage, and -especially in this case -Black Mama, White Mama; locations usually in the Philippines, and stars like Pam Grier, Ajita Wilson, and Laura Gemser. These were not, shall we say, high-brow entertainments. They were pure sexploitation, naked girls and faux lesbianism along with some sadism, bloodshed and gunplay.
This no-budget, Seventies-set cheapie is ostensibly about an anachronistically modern TV reporter (for, ahem, WPNS) going undercover to bust a sleazy Women's Prison. It's no spoiler to say things stay sleazy. Our intrepid reporter Valerie March leaves behind a comfortable life and wife (played modernly, as opposed to the "otherness" and suicidal tendencies this character would have if made 35 years ago) to be "Angel" and wind up in a Federal Prison that seems to be nothing more than a public park. The prisoners sleep in tents and have free range of the grounds and seem mostly there to be sexually assaulted and get into the occasional knife fight.
Director Cody Jarrett adds the wokka-wokka music and stylistic touches, but his cast of generously-called-"starlets" don't quite measure up to their WIP forebears, though Linda Dona's Warden respectably carries on the tradition of butch scenery-chewing likes of Stella Stevens and Mary Woronov.
Tura Satana and director Jack Hill show up as judges, and 60's TV regular Jacqueline Scott appears to get the plot rolling. Russ Meyer's muse Kitten Natividad seems to be having more fun than anyone else in the cast as the lewd Matron.
They seem to be aiming for "affectionate throwback" but the slow pacing and sporadic humor don't quite make it. The "somebody's living room" sets don't exactly scream "prison authenticity," either. (Hanging a Red Cross flag above a twin bed does not a hospital make.) The prison flick parts are weak, while other sequences suggest Jarrett has an excellent Charlie's Angels spoof in him.
However, nothing about it's PC, and the impression that fun was had making it comes through. There's not much else to recommended Sugar Boxx but the breasts. They show up a lot. If you want a film that recaptures the look and feel of seventies sexploitation, pick up Boogie Nights or Viva. If you want a WIP, get one of the originals, or the better spoof, Reform School Girls.
Special Features:
Sugar Boxx is resented in widescreen 16x9 Format with 5.1 Dolby Digital Surround Sound English Audio. English SDH subtitles are available. Extras include trailers, the featurette "Inside the Boxx: The Making of Sugar Boxx," a short film starring Tura Satana called "Tura Breaks Shit" and an audio commentary track featuring the director along with members of the cast.
Conclusion:
Exploitation without titillation, this affectionate rehash of Black Mama, White Mama is low-budget, tongue in cheek, and more dumbly inert than amusing. You'll want it to possess more charms than it does - there's the seed of a killer Charlie's Angles spoof here - but it does have a few chuckles and is graded accordingly.
Overall Picture:
Movie: Double-D
Extras: C
Posted by Jay at 10:53 AM