One A Week Reviews #8: Repo Chick

Well, this week is slightly tardy, but let's take a look at a true curiosity. Alex Cox's Repo Chick may not be embraced by fans of the original cult classic, but it's certainly a bid to make a new one. Sadly, such bids never work. My review for Dvdsnapshot.com:


Spoiled rich girl Pixxi De La Chasse has been disinherited by her family due to her numerous arrests for bad driving, her failure to get a job and her overall lack of some semblance of a responsible life. When her car gets repossessed, Pixxi ends up getting hired by repo men Arizona Gray and Aguas, and she soon becomes the best repo chick around with the help of her entourage – punk girl confidante, model-looks bodyguard and flaming stylist. While on the hunt for some antique railroad cars which carry a million-dollar bounty reward (also being sought out by a secret government agency!), clueless Pixxi ends up on a wacky train ride which is actually a plot by a terrorist organization. If their demands for the criminalization of golf are not met, then the train (whose caboose is carrying long-missing growler bombs from the Soviet Communist era!) is headed straight for downtown Los Angeles.
It's up to Pixxi De La Chasse to save LA!

I guess it's a testament to creativity and connections – there's no other explanation for why this movie exists. The box copy, for all it's wild, head-scratching exaggeration, doesn't quite do justice to this stylish-but-flawed movie. Squaring the cold war off against the current financial meltdown, the frenetic "Paris Hilton gone rogue" Repo Chick has nothing, really, to do with Cox's legendary cult favorite Repo Man. This is not only an obvious bid to make a "future cult classic," it's more a noisy children's program with slumming actors and sit-com allusions to sex and violence. 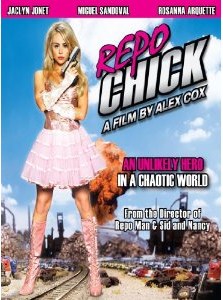 Filmed almost entirely on very obvious green screen sets to enable cartoonish, fantastical composites, Repo Chick builds a world of miniature sets and photo collage backgrounds, substituting toy cars and trains for the real thing. Pixxi, our Hilton stand-in dressed like an Attack of the Killer Bimbos wannabe, with her bubblegum pink life, reminds one of Cher from Clueless, except without the humanity. It's okay to have all the life of a doll, though, when the sets are dollhouses and the dream car belongs to Barbie.

The pacing, the exaggeration, it's all way too much. The story barrels along disjointed and enamored of it's own creativity in front of weirdly cutesy, candied visuals. Choppy and in love with it's own glamour, this is what Gregg Araki would have made in the nineties if he had the computer effects and no interest in sex. Seeing the actors superimposed amongst the miniature toy trains actually irritates after a while. The staging, the indulgence, the cheapness can only make the audience ask "is this just a joke? An expensive joke?"

I'm thinking "yes, it is." .
If you're not alienated by the first act set-up, when Pixxi introduces herself to a family she's about to foreclose on by shooting their dog will neatly wall off whatever sympathy you may've had left. She seems to be an excellent repo agent solely by being an overdressed, obnoxious jerk. She takes down her own family and falls in with terrorists who ban golf. Read that again and let it sink in as that's most of act two right there.
Famous faces abound. Xander Berkley, Frances Bay, and Karen Black are Pixxi's family. Miguel Sandoval and Robert Beltran become Pixxi's father figures. Chloe Webb and Rosanna Arquette pop up mostly to show they're aging well, though get saddled, respectively, with enormous false teeth and big scars. One is unsure if they're just there for a paycheck or the chance to work with Cox. Unknown Jaclyn Jonet is Pixxi and she's... perfectly serviceable. She has potential, but she's barely a center to build a film around.


The problem with being a DVD reviewer is that, ethically, you should watch the film all the way through. I did... but I predict Repo Chick will drive at least one of us to give up the business.

In a perfect world this film would be headlined "Alex Cox presents Paris Hilton as "Stephanie Plum" in a Amy Heckerling movie by Gregg Araki."

I don't know what happened to Alex Cox, but this is a more a creative curio than anything else. Is the target audience teenage girls on heavy medication? Repo Chick is Clueless as a Janet Evanovich novel, with packaging more appropriate to pornography. If issued by Troma. In the Eighties.