Even if you're as sick of the never-ending,, shuffling hordes of zombie movies as I am, it's easy to be charmed by the opening minutes of Fido. As a promotional newsreel for Zoncon, it sets up the world Fido is set in: one where zombies have been domesticated as "help" by a corporation. Timmy Robinson lives in a world of big steel fences and photo IDs so the Zoncon corporation knows who everyone is, but he still rides his bike home and has a crush on Cindy, the new girl at school. If you don't fit in there's always the threat of getting thrown out into the Wild, beyond the fence. Your Sunday drive is to the latest funeral, since having one is the height of social chic. This is the sunshine, nostalgic Fifties politely with zombies standing in for the fear of the other and the Atomic Bomb. Mind you, a middle school with a rifle range is nothing to sneeze at. 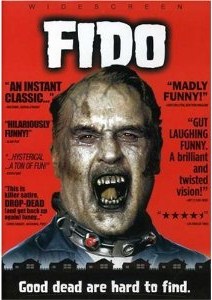 There's probably some easy, too obvious subtext going on here. The glossy, worry-free Fifties of sparkling Formica where the help is collared zombies doing the easy labor instead of just Beulah. What would undead milkmen and crossing guards do to the economy, though? The aesthetic of the movie is rather stunning, actually. Gorgeous cars, houses, and suits capture that artificial gloss of the Fifties and fill it with glossy, candy colors.
Dylan Baker and Carrie-Anne Moss are a darling "Ward and June" as Bill and Helen Robinson, even if their "problem with the Beaver" is his Funeral Savings Plan. Moss especially seems to be having a good time. Comedy is a big leap from most of her Trinity-dry ass-kickers and government agent types. She gets to rebel against conformity and get a tad smitten with her undead domestic help. Mom wants to keep up with the Jonses while Dad has a healthy, sensible aversion to the undead. Under the Fido makeup is an unrecognizable Billy Connolly, who looks to be enjoying the slapstick comedy involved in playing a silent, shuffling character. It's a surprisingly dialed-down character for the wild comedian.

It's nice to have a man around the house who's handy, but Fido does tend to eat those hands on occasion. He and Timmy become fast-friends when Fido comes to his defense against some bullies. They have a "boy and his dog" dynamic that's quickly put to the test when Fido eats the rancid bitch of an old lady neighbor, Mrs. Henderson. There's never a doubt where the audience's sympathies lie in this black comedy: with the ten year old boy covering up his pet zombie's murder. Timmy somehow stays as sweet and innocent as his namesake from Lassie while the body-count rises. (One wonders how Fido would have solved the tongue-on-the-flagpole issues from A Christmas Story if he'd been there.) In a way, this is a perverse episode of Lassie, just replacing both "dog" and "well" with zombies, or Leave it to Beaver where the gentle humor is death and June burns corpses when not vacuuming in pearls.

I do wish a little more time was spent with the next-door-neighbor subplot. Mr. Theopolis seems to have an undead "Gidget Geisha" in pony-tailed Tammy. For a gal with a grey face and clawed hands, her gams are still smashing. It's subtle, but gives another great layer of "ick" to the proceedings. Same as when you find out Fido can be soothed by something as simple as a Chesterfield. Fido is fleshed out, high concept, and really too good to be flying under the radar. A sick sitcom that's also sly zombie fun for the whole family.
Posted by Jay at 8:56 AM