This week, I'm tired. See, I had to go and write this exhaustive review of both versions of I Spit On Your Grave for DVDsnapshot. I put some work into this one, and do hope you enjoy it.

I SPIT ON YOUR GRAVE 1978 and 2010
OFFICIAL SYNOPSIS (1978):
I Spit On Your Grave has been condemned by many as "Vile," "Depraved," and "Degenerate Filmmaking." Others hailed it as "Misunderstood," "Superb Cinema," and "The Ultimate Feminist Movie." Now more than 30 years later, re-experience one of the most hated, debated and divisive movies of all time. Camille Keaton stars as Jennifer Hills, an attractive city woman who rents a backwoods cabin to begin writing her first novel. She is soon attacked by a group of local lowlifes and dragged screaming into a nightmare of violence. Left for dead, she devises a horrific plan for revenge. You may be shocked, outraged or even appalled. Yet you will never forget the raw impact of the original I Spit On Your Grave – the movie that changed the face of cinema.
OFFICIAL SYNOSPIS (2010):
A beautiful woman from the city, Jennifer Hills (Sarah Butler), rents an isolated cabin in the country to write her latest novel. Soon, a group of local lowlifes subject Jennifer to a nightmare of degradation, rape and violence. Left for dead, she returns for vengeance. Trapping her male attackers one-by-one, she inflicts acts of physical torment upon them with a ferocity that surpasses her own ordeal. When the carnage clears, victim has become victor.
Jeff Branson (All My Children), Daniel Franzese (Bully), Rodney Eastman (A Nightmare On Elm Street 3 & 4), Chad Lindberg (Supernatural), Tracey Walter (The Silence of the Lambs) and Andrew Howard (Transformers: Revenge of the Fallen) co-star in this shocker that Scott Collura of IGN calls "Appalling. In a Good Way!" 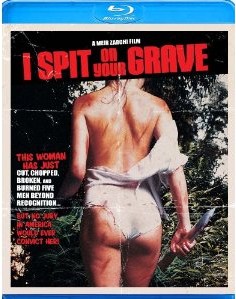 Our take:
I think it was always the image that got me. That nearly naked, mud-streaked woman in that grimy photograph, seemingly mid-stride through a jungle or forest holding a large knife. With the ad copy about no jury in the world ever convicting her for killing five (actually four) men and a title like I Spit On Your Grave, it looked like something determined, dangerous and very, very grisly. Usually sitting on the shelf next to Faces of Death and Make Them Die Slowly helped.
Being the original "Video Nasty," and one of the greatest success stories in the history of sensationalized cinema, it's hard to separate the actual film from it's aura of sleaze. There's also very little that hasn't been said about I Spit On Your Grave, and there is no reason to take this journey – there is NOTHING here - but underneath all that is a small, grim, interesting movie originally called Day of the Woman worth taking another look at.
Yes, it's exploitation, full of bright (near-pink, half-magenta) blood, mediocre acting, and copious nudity, but it really isn't a badly made film. The aesthetic is as undistinguished and bland as the TV offerings of the day. Scenes are frequently photographed in long shots, with actors fully visible in the frame, like something viewed in person. Some scenes (and the Matthew character with his jokey hat) feel like something on stage. The sleazy sensationalism of the well-known poster belies the banal, everyday horrors of the actual film.The lack of musical score and the staging of most of the storyline by daylight give everything a feeling of weirdly safe normalcy.
The content, however, is simplistic and frankly irredeemable. The storyline is simple; disturbing and offensive. Jennifer Hills rents her cabin to be alone in the woods to work. She's stalked and assaulted by four locals she's innocuously met once before. They rape her, let her go, then rape her again. They use her in an off-handed, aloof manner, like a toy, and when done, one of them is left to kill her, though he fails. After being left for dead she resolves to get revenge and does so, in an equally matter-of-fact manner. That's it.
It's the journey that's difficult. The men are beyond awful. Her revenge is calculated and cold, playing their assumptions against them. There are choices made in the filmmaking that have been discussed by many a scholar. (For such a seemingly flat film, there's a lot to chew on.) Why does she have to act seductively while meting out her justice? Is it that she kills the man she doesn't know spared her life? That her choice robs one family of it's husband and father? (I think this question inspired the moment in Kill Bill: Part One where The Bride tells Vivica Fox's daughter she can come looking for revenge in the future if she wishes.)

Camille Keaton, in retrospect, is a revelation. Exaggeratedly girlish but direct in the beginning, then determined and faux-seductive after the assaults, she is far more fearless than ever given credit for.
With her lean physique, long limbs and longer hair, she's an all-American beauty who recalls the better-known Sissy Spacek and Annette O'Toole. She has to act around being naked for half the film. The poster may be sensationalized nudity, but Keaton is vulnerable and matter of fact. I almost think it's not the sleazy title and nature of the story that got this film banned, but a shriek she gives during the second rape sequence.

As an audience, you can only react to her performance and plight at the moment with a sense of helplessness that makes you actively resent the film and her assailants. Do scholars ask the questions above because of that visceral reaction? Because we disregard "The Angels of our Better Natures' and enjoy it when avenges, and we feel guilt over it?
I'm thinking "yes." 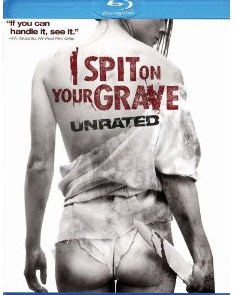 That iconic image is repeated for the packaging of the remake. The 2010 version of the film has all the right washed-out colors, grunge, and torture-porn elements inspired by years of grisly horror movies. It repeats several images from the original but lacks the forgivable originality of being first and suffers from some clumsy plot exposition. After three decades of "women in jeopardy" and "strong female leads," paths perhaps blazed by the first version, this return to the house by the lake seems like one in the crowd instead of a stand-out original.
Perhaps the oddest choices made in the remake are that the guys are almost given something vaguely resembling a motive (which does not excuse their behavior) in their first interaction with Jennifer, and that the scenes of her recovery after she's attacked are excised in favor of watching the criminals clean-up. In this go-round we don't get to see her nurse her wounds, but we do get an establishing shot of her well-stocked utility shed of death. There's a greater emphasis on voyeurism here. The tropes that developed from years of stalk'n'slash films that don't apply to the first serve the second. Seeing her watched and discovering the derelict dangers of the woods with her build a strong level of dread.
The attack sequence and aftermath are far more theatrical. This time the men are more cartoon villains, more actively cruel and taunting to her. They're also armed with a video camera and friends this time around. There's no question here of why she takes the law into her own hands. There's no spoiler in nothing they correct the original films claim of "five men" here. A weird strain of horse-inspired humiliation is also added here as they just wallow in the degradation here. You're grateful for the one time they cut away from the assault. We don't diverge from the original story until after the assaults. At that point the five men become the central focus of the story and Jennifer Hills pops up like a sadistic, avenging Michael Myers as she metes out her revenge – which is more sensationalized than in the original, but also considerably more satisfying. She's as crafty as a DIY home-show, full of elaborately helpful household tips for getting back at those who've wronged you. (In this version she doesn't ask for forgiveness, either.)
Keaton was almost a total unknown, and worked with four actors who never made another film (Eron Tabor is probably the best of them, in the part that could be named "David Hess"). Their exclusivity to that storyline added a reality you don't get here with the more-experienced cast of actors. Sarah Butler is the performer with the shortest resume here. She underplays the initial dread and attacks the violence with gusto, the post-attack shock being perhaps the only moment of obvious "Acting." Her presence is physically small but radiates intelligence. Meanwhile, this Johnny (Jeff Branson) radiates menace, but seems to have practiced every single facial twitch in the mirror prior to filming.
The most fascinating aspect of both versions, in the end, may be that you don't wonder for a moment if she got away with it. You still side with that famed jury that wouldn't convict her... and then you take a scouring pad to your brain.
AUDIO & VIDEO:
1978
2010
SPECIAL FEATURES:
1978
2010
CONCLUSION
What does one say about fascinating, somewhat technically accomplished films that appeal to the basest of urges? They don't take you to a good place, but they have a value beyond their letter grade.
OVERALL PICTURE:
1978
Movie: C
Video: A
Audio: A
Extra Features: A-
2010
Movie: C
Video: A
Audio: A
Extra Features: A-
Posted by Jay at 11:32 AM