One A Week Reviews #11: DeepStar Six

DeepStar Six was part of a mini-wave of underwater alien/monster movies released in 1989, along with Leviathan and The Abyss. However, it gets extra points for having a good, trash pedigree. Directed by Sean Cunningham (Friday the 13th, A Stranger Is Watching) and from wonderful ol' Carolco and Tri-Star, it's also an enjoyable little potboiler of a monster movie.

The crew of the DeepStar Six are trying to establish a missile base on the bottom of the ocean for the Navy. When they decide to blow up and collapse some undersea caves they wind up unleashing a monster of the depths. Scattered between various underwater vehicles and the DeepStar base, the crew quickly start getting picked-off in the best sci-fi monster movie ("Haunted House in Space") fashion. For what's definitely a B-movie, they establish some good tension in scenes involving radar screens and a rescue from the edge of an undersea cliff. Many of these films set in space rarely play up the threat of the void outside the ship. Here they do a good job of invoking the crushing depths and ocean that's right outside every few minutes. Right before the hour mark, there's a nice sequence where, thanks to a hot-headed disposal of weapons, they nearly crush the complex and find out they're springing leaks, out of air, and a few hours away from exploding. More tension is built through "man v. technology" than "man v. giant flapping-mouthed squidmonster."

The body count doesn't really start racking up until after this, once the undersea critter gets into the complex. It's first action is to chomp through a steel diving suit designed to withstand high pressure, and the man in it - insert "canned ham" joke here. Tempers flare as they try and escape while not getting eaten... 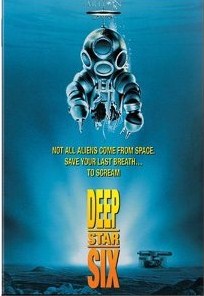 Eschewing the big stars of the other films, in place of Ed Harris, Peter Weller, and Richard Crenna, here you've got Greg Evigan, Miguel Ferrer, Nia Peeples, Matt McCoy, Cindy Pickett and Taurean Blacque (first billed, first bailed). Evigan is ridiculously baby-faced underneath that beard, must be why he cultivated it. (Also, Sigourney Weaver looks far butcher and more rough'n'tumble in a wifebeater than he does.) Ferrer is especially good. His usual "smug bastard" role has an extra dimension as the cover attitude for a guy who just wants to go home and winds up making mistakes with his every action. This might be the most empathetic the actor's ever been. Mostly, though, they all just get thrown around some decent looking sets and act tense with hair combed to look wet and bedraggled all the time. Not really a fashion forward look.

Carolco made very expensive (and expensive-looking) B-movies, and this is no exception. Whatever was saved in the B-list cast (all very capable) was spent on the DeepStar Six set - perhaps a little too spacious, but not "warehouse standing in for a space-ship" like many films of the type. Most of the effects are passable, even though there's some terrible miniatures and mattes - and they abuse the studio-bound "horizon tank" at the end. What that budget was not spent on was the script, it's a collection of cliches and cannon fodder characters, (the minute Pickett mentions her farm back home you know she's toast) but the hurdles they have to deal with get laid on so thick and fast it hardly counts. On the whole, it's better than I'd remembered it being. More a sci-fi disaster movie than the Alien-underwater monster flick it's marketing implied.
Posted by Jay at 9:08 AM