One A Week Reviews #31: Shinjuku Incident

A very pleasant surprise of a crime thriller reviewed for dvdsnapshot.com - HIGHLY RECOMMENDED. 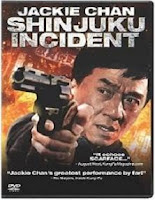 OFFICIAL SYNOPSIS
Action superstar Jackie Chan leads this tour de force as Nick Steelhead, a Chinese laborer who comes to Japan hoping for a better life. Unable to find honest work and bullied into the shadows with his fellow Chinese illegal immigrants, he soon finds himself ascending as the boss of a black market mob. After providing a deadly service to a powerful Yakuza crime boss, Steelhead's rise to mafia power spirals rapidly out of control as he's given reign over the dangerous and lucrative Shinjuku district. Get set to root for the underdog as Jackie Chan battles Asia's most ruthless underworld gangs in this action-packed crime drama.

OUR TAKE
I wonder what some of the more conservative American fans of Jackie Chan will think about this story of an illegal immigrant making "good" through a life of crime. Shinjuku Incident starts out like a docu-drama on the plight of the Chinese sneaking into Japan and making new lives for themselves outside of society. Humble immigrant Jackie Chan comes looking for the girl from back home and scrapes by in his new country through theft and scab labor, learning the tricks of living off the grid. From cleaning sewers and picking garbage to slowly creating his own gang of gypsy-like scammers, the story moves episodically as he succeeds beyond his wildest dreams. This is as much in the spirit of Charles Dickens and Horatio Alger as it is Scarface and The Public Enemy.

Gorgeous to look at, from an opening shipwreck (marred by obviously forced perspective in the CGI) through the gold-lit city streets of Tokyo, the cinematography matches the expansive sweep of the story. It's a full two hours that you feel without it ever dragging. There's an attempt at romantic subplot as Chan gets embroiled with the girl from back home and a hostess with a heart of gold. It's blandness offers a nice counterpoint to some jaw-dropping explosions of violence. Most of it happens in broad daylight with plenty of witnesses in seemingly instantaneous bursts. It's effective staging, giving realistic impact to each killing as the Japanese, Chinese, and Taiwanese gangs escalate their turf wars and racial tensions.

Chan, usually a warm presence, plays it serious and tends to come off as wan and exhausted. Whether fighting (though this film is light on the Martial Arts he's famous for), reminiscing about life back home, and even in a sex scene, his usual mischievous sparkle is set aside for this look at the downtrodden. The fact that he doesn't even smile until he embarks on bold, organized crime betrays this to be a crime thriller first and socially-conscious drama a distant second. That the film can be all that and convey the sense that the actions in the story affect the entire society at large better than almost any film I've seen is a testament to Shinjuku Incident being a fine surprise.

SPECIAL FEATURES
Shinjuku Incident is presented in Anamorphic Widescreen with both English and Chinese 5.1 Dolby Digital surround sound. Subtitles are available in English, English SDH, English for Chinese Version and French. Special features include select scene commentary with Jackie Chan and Say Hello to the Bad Guy: Up Close With Jackie Chan, a ten minute making-of featurette. Additionally there are trailers for Unthinkable, Harry Brown, The Square, A Prophet (Un Propehte), The Karate Kid and Chloe.

CONCLUSION
The story of the rise of a Chinese Crime Lord from humble beginnings through the ranks of the Japanese Yakuza, Shinjuku Incident gives Jackie Chan a chance to stretch his acting muscles in a serious social drama punctuated with big blasts of explosive violence. It's an expansive, handsome crime picture that rewards the investment of time and not to be missed.